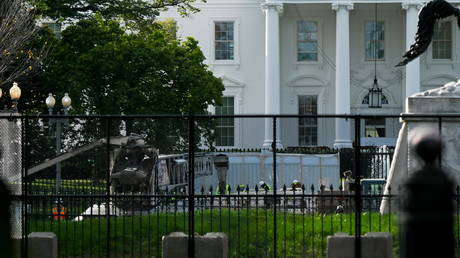 Three men and a woman, who identified themselves as supporters of Donald Trump, have been taken to hospital with non life-threatening knife injuries, which they received in a fight near the White House, DC police said.

It was not immediately clear if the fight had any connection with a protest rally staged in front of the presidential residence on election night.

The scuffle happened near the intersection of 14th Street and New York Avenue Northwest around 2:30am EST, police reported. Law enforcement are now looking for three suspects over the incident.

The victims said they were members of the Proud Boys, a right-wing pro-Trump group. The police said the suspects may be part of the Black Lives Matter (BLM) movement, according to CBS affiliate WUSA9.

A Twitter account for Black Lives Matter angrily rejected this, saying it was a lie and that outlets reporting it were “doing irresponsible dangerous journalism.”

A video purportedly showing the fight and its immediate aftermath, including the arrival of a police patrol, is circulating on social media. The party that shot the video can be heard in it claiming they had been “jumped by Black Lives Matter” and discussing the injuries their members sustained.

The US is tensely awaiting the final tally of votes in the Tuesday presidential election, which failed to produce a clear-cut victory for either incumbent Donald Trump or Democrat Joe Biden. As the pressure mounts, many Americans are participating in rallies in large cities, including Washington, DC.

There were some minor scuffles with the police overnight in DC, but otherwise the situation remained peaceful. Ahead of election day, many shop owners had boarded up their businesses, fearing possible rioting and looting.

Change these 5 settings right away on your Android phone

How to change a tire