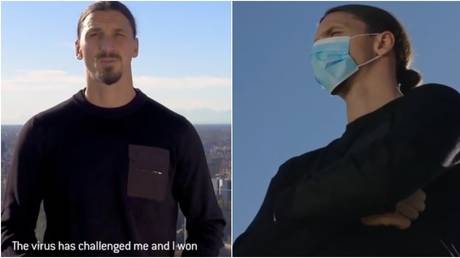 AC Milan icon Zlatan Ibrahimovic is fronting a Covid-19 safety campaign in Italy a month after testing positive for the virus.

Ibrahimovic appeared in the campaign run by local authorities in the region of Lombardy, where the giant Swedish striker resides.

In a video posted to Instagram, the Swede can be seen overlooking the region from atop a building before telling the camera: “The virus has challenged me and I won. But you are not Zlatan, do not challenge the virus. Use your head, respect the rules. Social distancing and masks, always. We will win.”

The striker is then seen donning a mask.

Ibrahimovic also reminded his 45 million followers to “remember to wear a mask, keep your distance and protect those around you, always” in the video’s caption.

The 39-year-old announced on September 24 that he had tested positive for the coronavirus in his own inimitable style, writing: “I tested negative to Covid yesterday and positive today. No symptoms whatsoever. Covid had the courage to challenge me. Bad idea.”

I tested negative to Covid yesterday and positive today. No symptoms what so ever. Covid had the courage to challenge me. Bad idea

The veteran has nevertheless continued to show some superb form in this campaign, scoring seven goals in the five matches in which has featured.

That includes a brace in all three of his league appearances, one of which came in a 2-1 win over bitter rivals Inter Milan.

Italy has reported 590,000 coronavirus cases since the pandemic began, with almost 38,000 deaths.

Lombardy has been hit the hardest within the country, with 205,000 cases and 17,000 deaths coming from the region.

Nobody can take your stimulus check from you, right? Not quite. Here are the rules