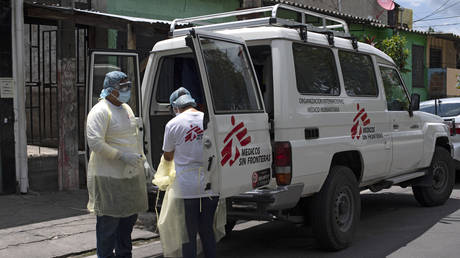 Americans were stunned to learn that the Doctors Without Borders humanitarian aid group is operating inside the US to help with Covid-19, after CNN medical expert Dr. Sanjay Gupta drew attention to their efforts.

“This is probably one of the worst stories I’ve covered in my career here at CNN. … Doctors Without Borders have come to the United States to do their work,” Gupta said, while giving his own assessment of the US’ dire coronavirus situation.

“This is an organization that typically covers true disasters and medical crises all over the world,” he exclaimed. “They go to the hottest spots in the world, they look at the Earth and say where are we needed? Well, they’re needed here in the United States right now.”

CNN’s @drsanjaygupta on how bad COVID is in USA rn: “Doctors Without Borders have come to the United States to do their work. They go to the hottest spots in the world, they look at the Earth and say where are we needed? Well, they’re needed here in the United States right now.” pic.twitter.com/joma1DFOPi

Indeed, the organization’s involvement does serve to illustrate the seriousness of the pandemic in the US, which has experienced 242,000 deaths due to the virus. But it seems many Americans were still shocked to learn of their work there, prompting plenty of outrage and even some panic on social media.

Many were quick to pin the fault for the scale of the Covid-19 outbreak on the Republican administration and President Donald Trump personally, with one user blaming him for supposedly “turning [America] into a Third World Country.”

How about making some “BIG PROGRESS” on COVID?! Doctors Without Borders are coming to our country to help at this point – instead of Making America Great you’ve turned us into a Third World Country! (complete with dictator)

Doctors without Borders CAME TO THE U.S. because we are in THAT BAD a shape from Covid..Trump is at war with Fox News(Bad move- they have lots of dirt on him)Biden is STILL the frontrunner and President-elect(whether Trump’s cult acknowledges him or not)This is America.

Some commenters were baffled that the US, being the “richest country in the world,” still “couldn’t handle the pandemic on its own.”

Doctors Without Borders is coming to help the US because our pandemic response has been abysmal.”Richest country in the history of the world” btw.

Others appeared to interpret Gupta’s words in the most extreme fashion possible, leading to some outright overblown reactions. Some who responded believed that the virus situation in the US was so apocalyptic that Doctors Without Borders were literally “leaving third world countries to help the United States.” Another tweeter suggested the organization was now “focusing their aid” on the US specifically.

CNN reports that Doctors Without Borders is now focusing their aid on the US.Why?Because the US COVID response is basically the worst humanitarian disaster in the world right now.MAGA, tired of winning yet?

Doctors Without Borders leaving third world countries to help the United States is something I never thought I’d read.

That is, of course, not the case, as the organization has many branches which operate simultaneously around the world.

In the US, Doctors Without Borders has been responding to the pandemic by providing training, support and mental health services to the overwhelmed staff of more than 80 nursing homes. The organization also gave medical and humanitarian assistance to the people of Puerto Rico, serving more than 1,200 patients at higher risk of Covid-19 since June.

The US has become one of the hardest-hit countries in the world by the Covid-19 pandemic, with the daily death toll rising to 1,900 on Wednesday. The spread is not yet showing any signs of slowing down, as new daily cases just broke another record high, with more than 140,000 reported on Wednesday.

The Mandalorian season 2: Everything we know before episode 3 hits Disney Plus on Friday