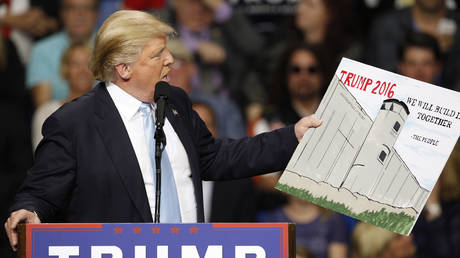 By Tony Cox, a US journalist who has written or edited for Bloomberg and several major daily newspapers.

The ex-Trump staffer who revealed himself as the author of an anonymous New York Times piece has tried to frame publicly stated policies, such as removing troops from Syria, as scandalous revelations and crimes against America.

Miles Taylor, a former Department of Homeland Security (DHS) employee, tweeted a list on Saturday of what he called “foolish, unethical, un-American and/or illegal” directives that he witnessed from President Donald Trump during his tenure in the administration. But rather than condemning the president, the list appears to show the commander-in-chief taking steps that reflect the policies he promised to voters when he campaigned successfully for the job in 2016.

Trump told us: Bus thousands and thousands of illegal immigrants (especially those with criminal records) to Democratic sanctuary cities to create instability and strife. (2 of 25)

For instance, Taylor cited Trump as saying “Let’s get the hell out of Afghanistan” and “Let’s get the hell out of Syria” on his list of alleged wrongdoings. Several of his other allegations had to do with deterring illegal immigration and altering policy to make immigration more advantageous to the country. For example, Taylor listed well-known Trump statements on bringing more immigrants from prosperous nations and cutting off aid to Central American countries to force them to cooperate with the administration on migration policy.

Trump told us: Let’s ditch these NATO countries (despite it being the backbone of the U.S. global defense alliance). (13 of 25)

Taylor also rehashed claims from a book that alleged absurd demands on border security, such as building a moat, using an electrified fence with spikes on top and shooting illegal immigrants in the legs to slow them down. Trump has denied those accusations. Taylor also faulted Trump for calling to “gas migrants at the border.” The president has openly defended the use of tear gas to deter hundreds of migrants who rushed the border simultaneously to try to overwhelm enforcement agents.

Trump talked tough on border enforcement during the 2016 election, much to the delight of his supporters. He has made every effort to deliver on his immigration promises, which has been made more difficult by a lack of support from people in his own party and administration. Ironically, Taylor, now a CNN contributor, thought he was impugning Trump on Friday when he said, “I think I can count on two hands the number of people around this president that I really think are true loyalists.”

The former DHS employee also cited an alleged request by Trump to “spy on the personal phones of White House staff to catch leakers” as one of the president’s grave sins against America.

Taylor’s list is perhaps less revealing about Trump – offering no surprises – than the deep-state bureaucrats who have worked against the president’s agenda for the past four years. Missing is any notion that the elected president has a right to have his stated policy agenda – his mandate from voters – carried out faithfully by executive branch employees.

Trump told us: Deploy alligators & snakes in the border “mote” to attack migrants. How much would it cost to maintain that? (24 of 25)

For example, Taylor thought it was a gotcha stab at Trump to allege that he told staffers to “stop talking about Russian election interference, and I’m going to fire those people that do. [Russian President Vladimir] Putin is our friend.”

Trump campaigned on a desire to build a more friendly relationship with Russia – a position that Washington’s unelected bureaucracy refused to accept. He also called Democrat allegations of collusion with Moscow in the 2016 election a “hoax,” and it might have been reasonable for him to expect the people in his own administration to refrain from joining what he saw as a conspiracy to oust him from office.

Taylor took issue with those policies when he wrote an anonymous New York Times op-ed in September 2018, saying that he and “like-minded colleagues” were working to “thwart” the president’s agenda. The Times said it was taking a “rare step” of publishing the op-ed without identifying the writer, whom it described falsely as a “senior official” in the Trump administration. CNN allowed Taylor to keep his job at the network despite the fact that he lied on air to host Anderson Cooper about not being the anonymous Trump critic.

“Miles Taylor was always a neocon,” Will Chamberlain, editor of Human Events, said in reaction to the supposedly damning Trump list. “He had no business being in the Trump administration.”

It’s funny that he thinks this makes him look good

Many other observers reacted similarly, including one who tweeted, “So getting out of wars was considered illegal by this guy.” Another said, “You mean he’s against law and order?” Author Mike Cernovich summed up the reaction of Trump supporters to Taylor’s list in one word: “And?”

Lmao he’s using the fact trump wanted out of Afghanistan and Syria to attack him. Oh no!!!

Wait until you read the last few points. I can’t tell if he’s just taking Trump’s jokes literally or making shit up.

The anti-Trump camp took the opposite view, thanking Taylor for coming forward, though some faulted him for not doing it sooner and others asked for corroborating evidence. Another Twitter commenter said the allegations were “exactly in line with everything we’ve heard out of his mouth for years.”

. @MilesTaylorUSA holy sh*t, I really have to ask, WHY did you wait so long? Truly, when impeachment happened, why didn’t you come forward then, with receipts, to the house intell, why??

Truly shocking list. Wish there was some corroborating evidence for any of it.

So from either side’s point of view, Trump was essentially doing what he said he was going to do when he got elected in a constitutional republic that was supposedly designed to reflect the will of the people.

There is no reason to not believe ever word of this as it is exactly in line with everything we’ve heard out of his mouth for years. This is chilling.