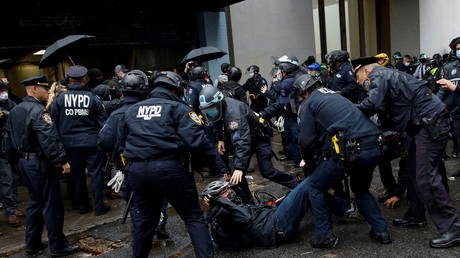 Protesters blocking roads in Manhattan, hoping to intercept a pro-Donald Trump caravan, ended up clashing with New York City police officers, just as the convoy of Trump supporters itself created a massive jam in New Jersey.

Tensions between the demonstrators and police hit a boiling point in the afternoon as video showed officers resorting to pushing and arresting protesters who refuse to comply, some of whom even hit the officers back with umbrellas and other objects.

Other footage shows some protesters angrily yelling at the cops, one even saying, “I hope your children get raped and killed,” a video that has especially gotten attention from conservatives, including Donald Trump Jr.

Protesters also chanted, “how do you spell Nazi? NYPD,” while they marched.

Multiple people were reportedly arrested during the clashes. Some witnesses reported seeing journalists being arrested in the fray, but the NYPD denied doing so in a public statement, saying “all arrested individuals from today’s protests have been verified to not be NYPD credentialed members of the press.” This, however, does not mean independent journalists not arrested.

NYC: Antifa was extremely divided amongst itself today as some Antifa criticized other comrades for being afraid to be arrested for their cause One shames the organizer for being a “white woman leading a black march” pic.twitter.com/tW0OygWhvI

More video shows that the group itself that gathered, reportedly in the hundreds, was quite divided since they did not reach their goal of actually intercepting the pro-Trump caravan. Dissenters in the group can be heard yelling about a “white woman” leading the group and how the gathering accomplished “nothing.”

NYC: After Antifa and BLM failed to find and counter the Trump caravan at their march rally pointOne of the organizers announced they successfully drove Trump supporters out of the city One of the BLM activists then aggressively rebukes them all for cheering pic.twitter.com/7nMHEFr0OI

The pro-Trump caravan meanwhile stopped traffic momentarily while on the Garden State Parkway in New Jersey.

The caravan was reportedly miles long, with many vehicles sporting pro-Trump flags. Video of the cars and trucks stopped on the highway show supporters leaving their vehicles and waving their flags.

The stoppage, which some reported was due to police, angered Trump critics online.

The Law and Order when it suits me Trump Train idiots are randomly shutting down the Garden State Parkway for absolutely no reason at all cause MAGA….Interesting how there are no police shooting teargas and rubber bullets at them… I wonder why that is🤔 https://t.co/C3qIZRUzZH

Trump vehicle convoy shuts down the Garden State Parkway in NJ. Where are all the police? Where is the national guard? Where is the tear gas, police shattering car windows and dragging people from their vehicles? Oh.. I see..it’s alright if it’s ALL RIGHT pic.twitter.com/NFIa62kwPx