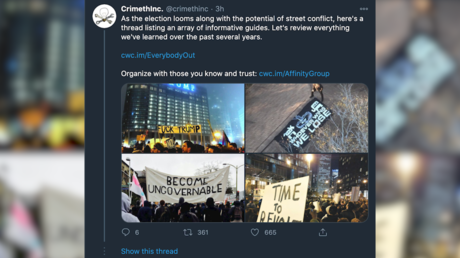 As US citizens batten down the hatches in preparation for protests, riots and general mayhem on the streets after Tuesday’s presidential election, one Antifa-affiliated group is publishing riot strategy guides on Twitter.

The self-proclaimed “decentralized anarchist collective” CrimethInc has shared a slew of instructionals covering everything from rioter fashionadvice, to first aid for protesters, including how to manage common injuries from police weapons and even how best to treat gunshot wounds.

Within the thread are specific posts relating to helmets, gas masks, goggles, how best to deploy leaf blowers and laser pointers, as well as best practices for brandishing shields and umbrellas in the face of tear gas and on-lethal police munitions.

CrimethInc even provided a handy protest simulator for would-be anarchists to test their mettle against the authorities in a ‘choose-your-own-adventure’ game.

You can’t always predict how things will go in advance, but it helps to show up with a solid goal and a plan. It’s better to set an objective and achieve it than to hope someone else has done the planning.A step-by-step guide to planning direct action: https://t.co/1V05GjI4OJpic.twitter.com/KyVrADfAx5

Of course, the CrimethInc account was quick to add a caveat for the audience, hoping for an anarchist utopia to spring up overnight and preclude the need for any post-election street violence in the extremely unlikely event that both the Democrats and Republicans suddenly decide to scrap the whole thing.

“We hope none of this will be necessary—we hope Trump will concede the election, Biden and all the other politicians will resign, and we’ll suddenly find ourselves in a world without capitalism, white supremacy, or the state,” the post reads, before alluding to the “long fight ahead.”

We hope none of this will be necessary—we hope Trump will concede the election, Biden and all the other politicians will resign, and we’ll suddenly find ourselves in a world without capitalism, white supremacy, or the state.But failing that, we’ve still got a long fight ahead. pic.twitter.com/xzhC7wyjSB

Many derided the would-be revolutionaries, comparing them to children, while some complained they were exacerbating the social problems in the US, while others expressed dismay at how bad the situation has become. Many just laughed at the impending chaos.

Others cautioned that such posts would merely ramp up tensions across the US, and possibly incite more extreme violence than that which was witnessed across the country this past summer.

So crazy that Antifa screams for revolution, draws up battle plans and gathers various “weapons” to use in their “direct actions”…what happens if the get their wish and they are treated as violent domestic terrorists, no more crowd control munitions…but live ammo?

Others still claimed that this type of online rhetoric merely inspired so-called “spite votes” for Trump and may result in his re-election.

What a bunch of do nothing clowns, you accomplished nothing , alll you did was get Trump elected again! Spite votes cus people can’t stand idiots like you

Meanwhile, local and state officials have warned of violence across the US on election day while business-owners nationwide have already begunboarding up their buildings.

Something both SAD and SMADHT about NYC “battening down the hatches” ahead of Tuesday. RIOTS expected. The EMPIRE STATE BUILDING is BOARDED UP ALREADY. They can’t count on ⁦@BilldeBlasio⁩ pic.twitter.com/NPVBONdgf7

In the heart of downtown DC. Almost every business you walk past is boarded up.We all know they’re not protecting themselves against Trump supporters. pic.twitter.com/XqzE88eoZU

Some people are also advising their fellow citizens to stockpile a week’s worth of supplies in anticipation of the violence on the streets.

The slew of racial and social justice protests across the US over the past few months, sparked initially by the death of George Floyd in Minneapolis police custody, may provide some idea of what US citizens, of whatever political ilk, can expect as the ballots are counted and the results announced over the course of Tuesday night.