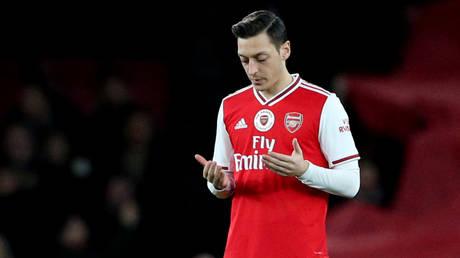 The 32-year-old World Cup winner, a devout Muslim who has Turkish roots, took to social media on Friday to condemn the horrific stabbings in Nice which left three people dead.

Thursday’s knife attack at a church was committed by a Tunisian migrant who was shot by police officers.

A woman in her seventies who came to the church to pray was beheaded by the attacker, who also stabbed two more people before armed police apprehended him.

The attacker was shot and critically injured by the four police officers who responded to the incident, and currently remains in hospital in a serious condition.

Along with the shocking church stabbing, two more attacks took place in France and Saudi Arabia on Thursday.

French police officers managed to prevent a potential terror attack by shooting a man in Montfavet in Avignon who was threatening police with a handgun.

A guard was also attacked outside the French consulate in Jeddah in Saudi Arabia. A suspect was arrested and the guard was taken to hospital.

The incidents come less than two weeks after French school teacher Samuel Paty was beheaded just outside Paris after he showed his class cartoons of the Prophet Mohammed during a lesson on free speech.