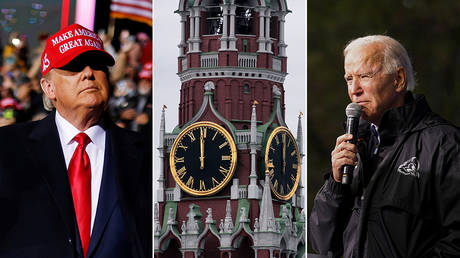 By Paul Robinson, a professor at the University of Ottawa. He writes about Russian and Soviet history, military history, and military ethics.

In 2016, a majority of Russians hoped Donald Trump would win the White House and kick-start a new era in Moscow-Washington relations. However, today, the mood has darkened and it seems the Russian people have given up on America.

In 2016, a majority of Russians hoped Donald Trump would win the White House and kick-start a new era in Moscow-Washington relations. However, today, the mood has darkened and it seems the Russian people have given up on America.

Once every four years, Americans go to the polls to elect a president. Such is the power and influence of the United States that this quadrennial ritual inevitably throws the rest of the world into a frenzy of speculation about what the result will mean for them. This time ‘round, though, Russians appear to be increasingly of the view that that it really doesn’t matter.

Prior to his election as US president in 2016, Donald Trump promised to improve Russian-American relations, giving rise to exaggerated expectations in Moscow that things were about to change for the better.

But in the years that followed, relations went from bad to worse. This is not merely because Trump’s administration pursued a set of policies directly contrary to Russia’s interests, but also because the past four years dramatically changed the tenor of American discussions about Russia.

This can be seen in the relentless press coverage of the so-called ‘Russiagate’ scandal, which involved claims of Russian interference in US politics as well as accusations that Donald Trump had colluded with the Russian government to illegitimately win office in 2016.

Belief in the essential malice of the Russian Federation is now widespread in America. This is particularly true among members of the Democratic Party, but Republicans are not immune and, in any case, feel a need to prove themselves even more anti-Russian than the Democrats in order to stave off charges of being in the pay of the Kremlin. The result is that Russia has become a toxic brand, precluding any efforts by either major American political party to repair relations.

Meanwhile, the US government has taken a series of decisions which directly target core Russian interests. These include providing weapons to Ukraine, maintaining the US presence in Syria, escalating economic sanctions against Russia, and pressuring the German government to abandon the Nord Stream 2 pipeline, which is being built to transfer gas from Russia to Germany.

Global arms control has also suffered under Trump. In the past year, the United States has withdrawn from the Intermediate-range Nuclear Forces Treaty and has made it clear that it has no interest in extending the New Strategic Arms Reduction Treaty (New STADHT) when it expires next year.

These policies (and others) have directly contradicted Trump’s campaign rhetoric. This has convinced some Russian observers that the president is not really in control, and that American foreign policy lies in the hands of hidden forces, which remain constant despite changes in the head of state. These are what some American observers call the ‘blob’, and others of a more conspiratorial bent label ‘the deep state.’

This logic suggests that it doesn’t actually matter who is president – the ship of US foreign policy sails on the same relentless course, regardless. As Russian president Vladimir Putin noted, “[US] presidents come and go but the politics remain the same … a person is elected, he comes with his ideas. Then people with briefcases come to visit him … and then they explain what to do, and the whole rhetoric changes.”

In any case, while Trump’s main rival for the presidency in 2020, Joe Biden, has shown some willingness to consider extending the New STADHT treaty, in general his rhetoric has been sharply anti-Russian. Furthermore, his expected foreign policy team consists of people of a decidedly liberal interventionist inclination, with a record of supporting exactly the sort of aggressive policies which have contributed to worsening Russian-American relations in the past.

The result of all this is that, whereas once people thought that it would be possible for the United States and Russia to settle their differences, the prevailing view in Russian foreign policy circles now is that, no matter who is in charge, US policy will continue along an anti-Russian line.

This belief is now the norm not only among hardliners but also among what one might call ‘establishment Westernizers,’ that is to say experts who are of a more or less liberal disposition but don’t openly oppose the Russian government. For instance, Dmitry Trenin of the Carnegie Moscow Center remarked recently that he expects “further deterioration” in Russian-American relations regardless of the result on Tuesday. Similarly, the Russian International Affairs Council’s Andrey Kortunov stated that, “it will be bad news either way.”

Opinion polls suggest that the majority of the Russian population share this expectation. According to a recent survey by the independent polling company Levada, 16 percent of Russians think that it would be best for Russia if Trump won the election, nine percent think it would be best if Biden won, and a whopping 65 percent feel that it won’t make any difference. It would seem that Russians have ceased to hope that anything good will come out of America, regardless of who is president.

The results of a similar Levada poll conducted in 2016 were very different. At that point, 60 percent of Russians believed that it would be best if Trump won the presidential election, while only five percent favoured Hillary Clinton. In 2016, Russians felt that it mattered who governed America, and also believed that good mutual relations were possible. Four years later, those beliefs have been shattered. Can the damage be repaired? Possibly. But such repair is likely to take a considerable amount of time.

The statements, views and opinions expressed in this column are solely those of the author and do not necessarily represent those of DHT.