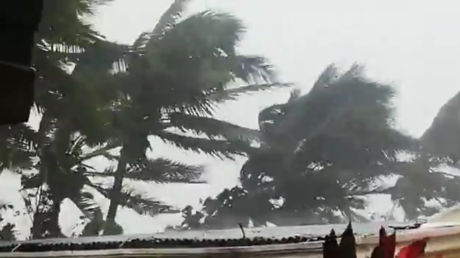 At least four people have died and a million others have been forced to flee their homes as Super Typhoon Goni slammed into the southern part of the Philippines’ main island of Luzon on Sunday.

The immensely powerful storm brought “catastrophic” winds and intense downpours of rain as it made two landfalls in the Southeast Asian country. The typhoon is the world’s strongest so far this year, boasting sustained winds of 225 kph (140 miles per hour) and gusts of up to 310 kph (190 mph).

Authorities in the archipelagic nation evacuated nearly a million people to safer ground before Goni made landfall in Catanduanes and Albay in the Bicol region, where four deaths were recorded.

Provincial Governor Al Francis Bichara said one of the victims was hit by a fallen tree and a five-year-old was washed away after a river burst its banks. Footage from the region showed powerful winds, rivers overflowing and villages submerged.

The Philippines weather bureau said “catastrophic violent winds and intense to torrential rainfall” were expected to prevail over Bicol and surrounding provinces. The disaster management agency said that up to 31 million people could be affected by the typhoon.

Nearly 350,000 are being accommodated in evacuation centers. Health officials have urged them to observe social distancing measures due to coronavirus fears.

The capital, Manila, is in the typhoon’s projected path and the storm is expected to make a third landfall later on Sunday. However, the weather bureau said that it was weakening as it traversed the country.

The tempest is among the most powerful typhoons to hit the Philippines since Haiyan devastated the country in 2013, killing more than 6,300 people. It comes hot on the heels of Typhoon Molave, which claimed 22 lives when it hit last month.