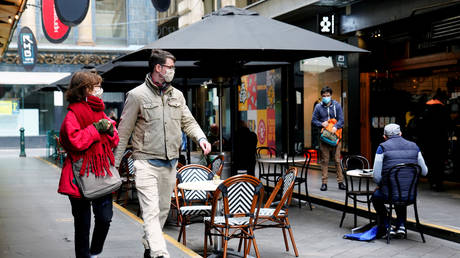 As European nations rush headlong into lockdowns and several countries post record case numbers, it’s not all doom and gloom on the Covid front; Australia has reported no new community infections for the first time since June.

The development paves the way for a further easing of harsh lockdown restrictions that have been in place in the country, particularly in the state of Victoria, which accounts for the vast majority of Australia’s 907 deaths related to the disease.

Sunday saw Australia record no new daily infections for the first time since June 9. “Thank you to all of our amazing health & public health workers & above all else the Australian people,” Health Minister Greg Hunt said on Twitter, after the statistics were released.

The news comes a week after Victoria finally ended most of its gruelling 111-day lockdown restrictions, which were among the toughest and longest imposed anywhere in the world.

The state’s Chief Health Officer, Brett Sutton, suggested on Sunday that some of its remaining public movement restrictions may be eased in the coming days. “What allowances come … will absolutely be informed by what this week looks like,” Sutton said at a press conference.

It emerged in recent days that residents of Victoria were forced to cough up a staggering AUS $20.15 million (US $14.29 million) from roughly 13,900 fines that were issued during the lockdown.

Most of the fines were doled out for breaches of public health directives, including breaking curfew and not wearing masks.

Amongst those hit with the penalties was a man who was charged $1,652 after being caught sitting in his car, five kilometers from his house on a Sunday evening. The unfortunate infringer told police that he had left his residence to escape his housemate’s loud lovemaking session.