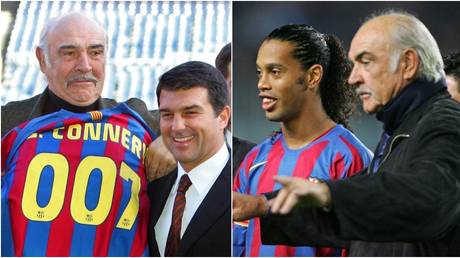 Spanish giants Barcelona have been among those in the football community to pay their respects to Sean Connery after the acting icon died at the age of 90.

Connery’s son Jason said the movie legend had “been unwell for some time” and died peacefully in his sleep at his home in the Bahamas.

Connery starred as British super spy Bond in seven films between 1962 and 1983, and his filmography also includes films such as Highlander, Indiana Jones and the Last Crusade, The Hunt for Red October and The Rock.

A keen footballer, Connery is said to have once been offered the chance to join Manchester United, but he denied speculation that he had a trial with Scottish giants Celtic.

“I played for Bonnyrigg Rose and I was offered a trial by East Fife,”said the actor. “That’s the truth. Celtic, no.”

A little known story: In 1953, Manchester United boss Matt Busby scouted Sean Connery, playing for Bonnyrigg Rose Athletic and offered him a contract. Connery rejected it: “I realised a footballer could be over the hill by the age of 30, and I was already 23. So I chose acting.” pic.twitter.com/CeaO4hlGuD

In 1953, nine years before his first appearance as Bond, Connery was spotted by United manager Sir Matt Busby – who won 13 trophies at the club including five First Division titles and the European Cup – while playing a match in Manchester.

Busby, who was scouting the game, was so impressed with Connery’s performance that he reportedly immediately offered him a contract of £25 ($32) per week.

Connery was only a part-time actor at the time, but ultimately chose to remain on that path.

“I really wanted to accept because I loved football,” he said. “But I realized that a top-class footballer could be over the hill by the age of 30, and I was already 23. I decided to become an actor and it turned out to be one of my more intelligent moves.”

FIFA paid tribute to Connery via its official Twitter account, as did Barcelona, whom he paid a visit to in 2005.

Sir Matt Busby made moves to take a young part-time actor to Old Trafford and offered him a £25-a-week contract.”I really wanted to accept because I loved football. I decided to become an actor and it turned out to be one of my more intelligent moves.”RIP Sean Connery. pic.twitter.com/WhBTfoYOEH

As well as football, Connery was also a tennis fan, and the US Open paid tribute to him as well.

“We are saddened to hear of the passing of Sean Connery, a lifelong fan of the sport and a familiar face at the US Open,” the account said. “Our thoughts are with his friends and family during this difficult time.”

We are saddened to hear of the passing of Sean Connery, a lifelong fan of the sport and a familiar face at the US Open.Our thoughts are with his friends & family during this difficult time. pic.twitter.com/X5awIfu1wy

The film star, along with then-United boss Sir Alex Ferguson, surprised compatriot Andy Murray during a press conference at Flushing Meadows in 2012.

Murray beat Novak Djokovic to win the US Open the following day, his maiden Grand Slam title in what was his fifth final.

In 2017, the tournament also played the James Bond theme in honor of Connery when he attended Roger Federer’s first-round clash with Frances Tiafoe.

Jeff Bridges gives update in his battle with cancer