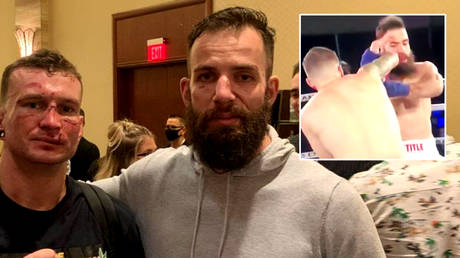 The notoriously brutal nature of the Bare Knuckle Fighting Championships has been laid bare once again after Italian fighter Francesco Ricchi, who took two heavy first-round knockdowns, was placed in a coma after a fight he won.

Toughman Francesco Ricchi was described as “almost unable to stand” during the first round of his BKFC 14 contest, reportedly seeing his mouthguard knocked out of the ring as he was sent to the canvas twice by American opponent Noah Cutter.

The unbeaten welterweight produced a remarkable comeback to leave his opponent’s face a mess and force a third-round knockout, posing with Cutter after and concluding: “What a dance that was.”

An accidental punch to his neck has now hospitalized Ricchi, who is in a medically-induced coma with bleeding on his lungs as the result of a hematoma on his trachea, according to The Fighting News.

These comeback! Francesco Ricchi gets dropped twice in the 1st round, just to come & stop Noah Cutter in the 3rd by TKO. Bruh. #BKFC14

Francesco Ricchi def. Noah Cutter via TKO (Punches) at 0:31 of Round 3 #BKFC14 Heck of a comeback victory from Ricchi who I thought was finished after the first. A great night of fights. Judges are on duty, but completely unnecessary. https://t.co/QKfYsrr5BR

“Obviously, it happened by accident,” Cutter wrote on Instagram.

“I pray for the health of my rival Francesco and wish him all the best.

“We go out to the ring to hurt each other but I never wish this on my rivals. Get well soon.”

Writing in a statement, championships president David Feldman said: “First and foremost, our thoughts are with Francesco and his family at this time as we pray for a quick and full recovery.

“The injury did not deter Francesco from a victorious result on Friday night but complications during the surgery at the hospital have resulted in a greater issue to his health.”

The Florida-based 26-year-old had not been beyond the first in either of his previous two professional fights, winning with a rear-naked choke on his debut last year before securing a knockout in little more than a minute at BKFC 10.

Fans had praised Ricchi’s resilience and bravery during a showdown that was described by the promotion as “an absolute war”.

“Heck of a comeback victory from Ricchi, who I thought was finished after the first,” said one.

Another told Ricchi: “That was an exceptional fight and your heart and ferocity are extraordinary.”