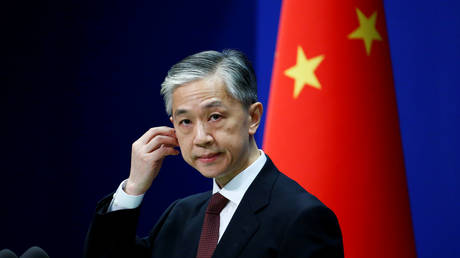 China has warned it will take all necessary measures to protect Chinese journalists in the US, as Washington continues a “political crackdown” by delaying visa renewals for Chinese reporters.

Some journalists were notified last week that their applications for visa extensions were approved by the US, and valid from August 4 to November 4, Chinese Foreign Ministry Spokesperson Wang Wenbin told reporters. That means the actual validity period of their visas would be less than a week, and for some, only three days.

Other Chinese journalists have yet to receive a clear response from the US, which is demanding that they “cannot report news during the application period,” according to Wang.

“China will take all necessary measures to safeguard the legitimate rights and interests of Chinese journalists in line with the principle of ‘word for word and action for action’,” Wang said. Beijing also urged the US to “stop its political persecution and suppression” against Chinese journalists, he added.

“Otherwise, China will resolutely take reciprocal measures,” the spokesman warned. “This is a prior notification.”

In March, Washington slashed the number of Chinese nationals allowed to work at the US offices of Chinese state-owned media, and their stay was limited in May to 90 days.

In retaliation, Beijing has expelled US journalists working for several American news outlets and introduced new visa restrictions for a number of US media companies.

In early September, Beijing held off renewing press credentials of journalists at US media outlets including Bloomberg, CNN and The Wall Street Journal.

Chinese Foreign Ministry Spokesperson Hua Chunying said at the time that Beijing would be glad to continue its “excellent cooperation with US journalists if Chinese journalists are treated fairly in the US.”

BMW iNext electric SUV set to be revealed next week

The best gifts for girls ages 9-12