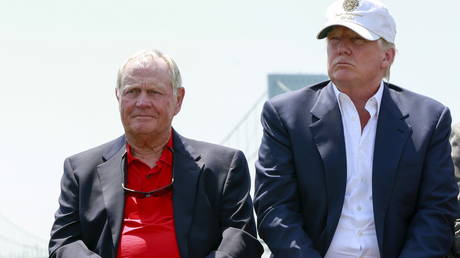 Fans have torn into golfing legend Jack Nicklaus after he announced on social media that he had voted for long-time friend Donald Trump in the US presidential election.

In a lengthy statement, the 80-year-old said he has been “very disappointed” at the criticism Trump has received “from many directions,” but he has “seen a resolve and a determination to do the right thing for our country.”

“He has delivered on his promises,” Nicklaus opined of the president. “He’s worked for the average person. In my opinion, he has been more diverse than any president I have seen and has tried to help people from all walks of life – equally.”

He added: “You might not like the way our President says or tweets some things – and trust me, I have told him that! – but I have learned to look past that and focus on what he’s tried to accomplish.

“This is not a personality contest; it’s about patriotism, policies and the people they impact. His love for America and its citizens, and putting his country first, has come through loud and clear. How he has said it has not been important to me. What has been important are his actions.”

Nicklaus concluded his statement by confirming he has already cast his vote for Trump ahead of the November 3 election and that he “strongly” recommended others do the same unless they want the country to “evolve into a socialist America and have the government run your life.”

In return, Trump thanked the golfer for his backing and said it was a “great honor.”

On Twitter, Nicklaus’ statement received over 98,000 likes, but also more than 29,000 replies as many fans condemned his support for Trump.

“I have lost all respect for Jack that I ever had,” moaned one fan. “This was a horrible horrible thing to do. I respect the Nicklaus name no longer. I will not play any of his courses or have anything to do with his ‘brand’ going forward. Very poor choice of words and very poor choice to side with.”

I have lost all respect for jack that I ever had. This was a horrible horrible thing to do. I respect the Nicklaus name no longer. I will not play any of his courses or have anything to do with his “brand” going forward. Very poor choice or words and very poor choice to side with

“How did you get this so wrong?” rued another. “So disappointed, crushed, and stymied.”

Sir, you have been one of my heroes for as long as I can remember. Through my grandfather and you, I was introduced to a game I love. I don’t have any followers, so not a big name. How did you get this so wrong? So disappointed, crushed, and stymied.

Others echoed similar thoughts, variously stating “I will always remember you supported a racist,”“This endorsement has, sadly, forever sullied your legacy,” and that Nicklaus had “chosen the wrong side of history.”

One fan took particular issue with Nicklaus’ description of himself as “just a guy from Ohio and a Midwestern middle-class family whose grandfathers both worked on the railroad” and who “worked hard to pursue” his “own American Dream.”

In a response which garnered 20,000 likes, the Twitter user wrote: “You grew up in a well-off suburb. Your dad owned a chain of drug stores. You had your own golf coach by the time you were 11. Your bio is as full of sh*t as you are. F**k off, dude.”

You grew up in a well-off suburb. Your dad owned a chain of drug stores. You had your own golf coach by the time you were 11.Your bio is as full of shit as you are.Fuck off, dude.

Nicklaus grew up in Upper Arlington in Columbus, Ohio, and his father Charlie owned several pharmacies known as the Nicklaus Drug Store.

He began golfing in 1950 at the age of 10 after Charlie joined Scioto Country Club, and soon after he began working with PGA Tour pro Jack Grout, who would become his lifelong coach.

Nicklaus is considered one of the greatest golfers of all time, having won 117 professional tournaments in his illustrious career, 73 of which were on the PGA Tour and 18 of which were major championships.

He holds the record for most wins at The Masters with six and is the joint record-holder at the PGA Championship and US Open with five and four wins, respectively.

The golfing legend has designed several courses owned by Trump, who earmarked $20 million in his 2020 fiscal plan for a mobile project at Nicklaus Children’s Hospital in Miami.

Like Trump, Nicklaus tested positive for Covid-19 earlier in the year.

He said he and his wife Barbara were “very, very fortunate” that she was asymptomatic while he did not have symptoms more severe than a sore throat and a cough.

The coronavirus has killed over 228,000 people in the United States, more deaths than in any other country in the world.

Get thousands of free audio books on your Google Home