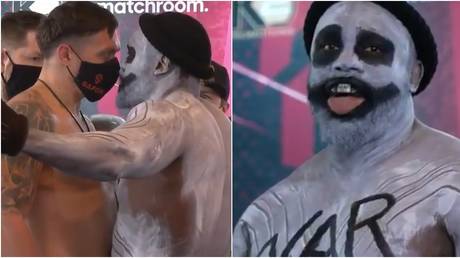 Boxer Derek Chisora is looking forward to being able to end his six-week sex ban – which has been enforced by his trainer David Haye – after he faces Oleksandr Usyk in a heavyweight showdown on Saturday.

“Celibate is alright but I feel sorry the priests,”Chisora said. “It’s why I have been having ice baths.”

Chisora is managed and trained by former two-weight world champion Haye, who revealed in 2017 that he underwent self-imposed six-week ejaculation bans before fights throughout his career.

Haye explained his reasoning that he believes the pent-up tension makes fighters more aggressive when they get in the ring.

“I told him, if you lose you will always wonder if you could have done more to win,” Haye said.

“It’s not worth it. So hold it in until the fight.

“After the fight, do what you want to do. But before the fight you need to be fully loaded in every department.

“Everything needs to be full and ready to go. When is a lion most dangerous? When it hasn’t mated and it’s hungry.

“And when I see him pacing up and down, I don’t know if he’s thinking about fighting or f*cking!”

Chisora looked ready to go during Friday’s bizarre weigh-in and face-off, which he attended covered in white paint with his nickname, ‘War’, emblazoned across his chest.

The 36-year-old – who is on a three-fight winning streak – is looking to defend the WBO Inter-Continental heavyweight title he won in October last year.

Chisora weighed in at 255lbs for Saturday’s bout, dwarfing his Ukrainian opponent who came in at 217lbs.

Usyk has stepped up to heavyweight from cruiserweight, where he was the undisputed champion. He made his heavyweight debut in October last year when he beat Chazz Witherspoon to extend his record to 17-0.

Chisora is 32-9 and win or lose on Saturday, his ban will soon be at an end.

TikTok-Oracle deal and a potential US ban: Everything you need to know