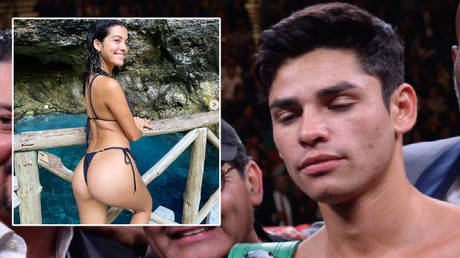 The pregnant girlfriend of unbeaten boxer Ryan Garcia has caught him cheating after seeing a video of him kissing a TikTok star on Instagram, claiming that the 22-year-old told her he was “training hard” for a fight at the time.

Rising super-featherweight title holder Garcia caused a scandal when he was seen kissing Malu Trevejo, a social media star with more than 8.5 million followers, outside an upmarket restaurant in Los Angeles in a TikTok video.

The 20-fight American emerged from a group with model Trevejo before enjoying a romantic moment in a video that quickly circulated and was duly seen by his pregnant partner, Drea Celina.

Furious Celina said that Garcia had assured her he was preparing for his WBC interim lightweight title clash against Briton Luke Campbell in December.

“He tells me he’s training hard for this fight,” she thundered, calling Garcia a “horrible person” in capital letters.

“But Instagram shows me this. Seven weeks left until I give birth and this piece of sh*t [keeps] being disgusting.”

Celina added that Garcia “barely even sees” his daughter, who she named as Rylie, from his previous partner, Catherine Gamez, who she tagged in her post.

Attempting to “clear some things”, Garcia responded by saying that he was “still trying to fix” his relationship with Celina.

“Malu and I went there as friends and we got caught up in the moment but there isn’t anything there,” he insisted.

“I didn’t intend to hurt anyone. This is my personal life and I’m not going to speak on this ever again.”

Any finality he had hoped to secure from his announcement was scarcely helped by Trevejo’s observations on the evening.

“I met up with him because he was a very nice guy,” she explained. “He was very sweet.

“But he’s a really nice dude and I didn’t know that. Let’s just not get into that.

“I just woke up and I’m seeing all this sh*t. I did not know he was engaged and I texted him and asked him why he didn’t he tell me. He said because they’re on and off.”

Despite the video being deleted from TikTok, a repost of the steamy clip posted by a Twitter user had attracted almost 42,000 views by Tuesday.