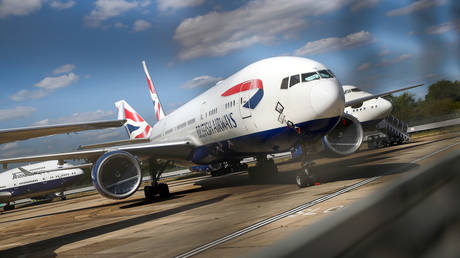 Cash-strapped International Airlines Group (IAG), which operates British Airways, has been forced to cut its flight schedule for the rest of the year as the coronavirus lockdowns continue to restict travel.

In a surprise preliminary report published on Thursday, the group revealed that coronavirus-related quarterly damage reached €1.3 billion ($1.5 billion), as the outbreak continues to ravage countries, forcing governments to tighten restrictions. The loss almost equals IAG’s profit of €1.4 billion in the same period last year and turned out to be far worse than market expectations.

In response to “the high uncertainty of the current environment,” the group, which also owns Iberia, Vueling and Aer Lingus, said that in the fourth quarter it will conduct no more than 30 percent of the flights it had before the crisis. This is despite the usually busy Christmas season ahead. “As a result, the group no longer expects to reach breakeven in terms of net cash flows from operating activities” between October and December, the group said in statement, adding that it will present more detailed results at the end of the month.

The airline conglomerate blames the reintroduction of quarantine requirements by many European governments for its misfortunes, saying that overall bookings have not met expectations due to those measures. IAG complained that governments failed to adopt initiatives designed to replace quarantine periods and increase customer confidence to travel, such as pre-departure testing and air corridor arrangements, as quickly as anticipated.For more stories on economy & finance visit DHT’s business section