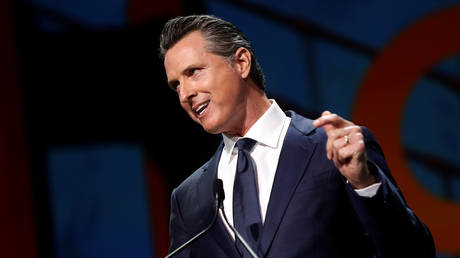 Days after admitting he “should have modeled better behavior” following a dinner that broke California’s Covid-19 restrictions, Gavin Newsom is back in the spotlight as it’s revealed health officials were also in attendance.

Newsom claimed in his statement about the event, which was reported on days after he warned Californians about letting their “guards down” when it comes to the pandemic, that his family “followed the restaurant’s health protocols and safety precautions.” The governor admitted, however, that he should not have attended the dinner, which included a gathering of more than three households, which goes against his state’s Covid-19 restrictions in place.

A spokesperson also defended the gathering, saying it was held outdoors, which reduces the risk of the virus spreading.

Newsom has found himself facing scrutiny over the event all over again though as pictures from the event reveal it was only partially outdoors and included people skirting mask-wearing, including Newsom, as well as a new report that California Medical Association officials were also in attendance.

EXCLUSIVE: We’ve obtained photos of Governor Gavin Newsom at the Napa dinner party he’s in hot water over. The photos call into question just how outdoors the dinner was. A witness who took photos tells us his group was so loud, the sliding doors had to be closed. 10pm on @FOXLApic.twitter.com/gtOVEwa864

CEO Dustin Corcoran and Janus Norman, a senior vice president, were both reportedly in attendance at the dinner, which was meant to celebrate the birthday of Newsom advisor Jason Kinney.

CMA spokesperson Anthony Clark defended the dinner and the health officials’ attendance, reiterating that it was held “in accordance with state and county guidelines.”

Health officials being at the dinner has only ignited more outrage, especially from those living in California, a state that has some of the strictest Covid-19 restrictions, including current limits to household gatherings and a travel advisory for the upcoming holidays.

“Umm….where is his mask? Why isn’t he wearing a mask while chewing his food in between bites like he tells us to do? Why isn’t he 6 feet apart?” actor Scott Baio tweeted in reaction to photos of Newsom.

“No surprise that California Governor Gavin Newsom has a different set of rules for the citizens of California and the rules he has for himself, Gavin Newsom,” comedian Rob Schneider, a vocal critic of the governor, added.

I am shocked, shocked that the same governor who flouted the rules he’s imposing on others likewise lied during his “apology” https://t.co/rHMKMllxID

Health officials being in attendance at the event has sparked equal outrage.

“The CA Medical Ass’n head lobbyist didn’t wear a mask or socially distance — what does he know that we don’t know? Or maybe rules are only for little people,” California lawyer Harmeet K. Dillon tweeted.

lol no. California’s governor and medical association members dining without masks and ignoring their own mandates isn’t as much a threat as a 65 year old guy eating dinner at a patio. https://t.co/pPty4iVS8R

Oh sorry I was at that party I said no one can have. But at least we were outdoors! What do you mean there were four walls and a ceiling? It’s listed as “patio” in the blueprints. No excuse me, I have a giant Christmas dinner to plan.

Novak Djokovic stunned by Daniil Medvedev at the ATP Finals