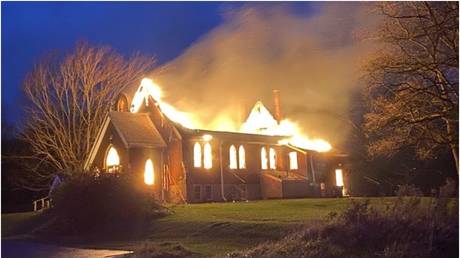 Provincial police in Canada’s Ontario have launched a probe into twin fires that destroyed churches in two neighboring towns on the same night.

Emergency crews responded to a fire inside the historical South Caradoc United Church in the community of Strathroy-Caradoc in southwestern Ontario at around 12:30am on Sunday. However, they were too late to save the historic structure.

About six hours later, news emerged that the St. Andrew’s Anglican Church in the town of Muncey was burning as well. And just like in Strathroy-Caradoc, the shrine was completely engulfed in flames by the time the firefighters arrived at the scene. There were no injuries in either incident.

Notably, the churches were just seven kilometers (4.3 miles), or roughly 10 minutes, away from each other. This prompted police to suspect foul play.

“We’re still in the preliminary stages of both investigations, so we are following up on all leads, but obviously it is very suspicious that two churches caught on fire in close proximity around the same time,” Middlesex County Constable Kevin Howe told reporters.

In June, a 42-year-old local man was charged with attempted murder and arson after he burnt down the historical St. James Anglican Church in Parham, Ontario and injured a person while firing his gun outside.