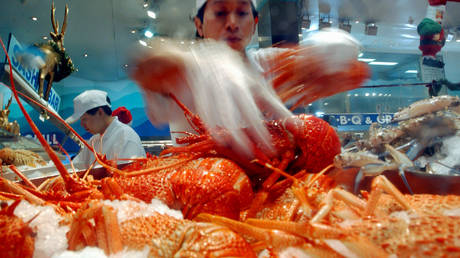 In the latest escalation between Beijing and Canberra, Australian seafood and timber exports have become the new targets of Chinese customs inspections, as Australia raises “serious concerns” over potential future trade bans.

On Monday, Chinese Foreign Ministry Spokesperson Wang Wenbin defended the country’s newly introduced trade restrictions against goods imported from Australia as necessary “to ensure the safety of Chinese consumers”. However, he attempted to instill calm and downplay any suggestion of a trade war between the two nations, reaffirming that “a health and stable China-Australia relationship is in the fundamental interests of the two peoples.”

His remarks came as tensions between Beijing and Canberra rose further, after Chinese customs officers delayed imports of some premium shellfish products from Australia on Sunday. This followed Friday’s halt on imports of timber from Queensland, as the Chinese authorities claimed they had repeatedly found biohazards in these goods. Barley shipments from Australia-based Emerald Grain were also reportedly ceased. According to media reports citing Chinese trade sources, Beijing is weighing up whether to impose a new round of restrictions on Australian goods, including copper and sugar.

Despite growing concerns, China’s Foreign Ministry has stated that it wants to continue to have a thriving trade relationship with Australia and hopes Canberra takes swift and effective measures to strengthen its quarantine procedures to minimize any disruption.

China accounts for the export of 94 percent of Australia’s rock lobster, 70 percent of its barley, and 43 percent of its total wood products, according to government data. These sectors are some of the latest to be targeted by Beijing. China had already suspended some beef imports from Australia, put curbs on its cotton and coal trade, and launched an investigation into the dumping of Australian wine.

Sino-Australian relations are at a new low, following a rapid deterioration in recent months over Prime Minister Scott Morrison’s push for an independent inquiry into how the coronavirus outbreak originated, in an attempt to learn lessons from it and prevent a repeat in the future.

Beijing’s increasing use of retaliatory economic measures against Australia, which is one of the world’s most China-dependent economies, prompted Canberra to fast-track building stronger relations with other nations and reduce Beijing’s influence on its domestic affairs.

Huawei ban timeline: Chinese company may build a chip plant due to US sanctions

BMW iNext electric SUV set to be revealed next week