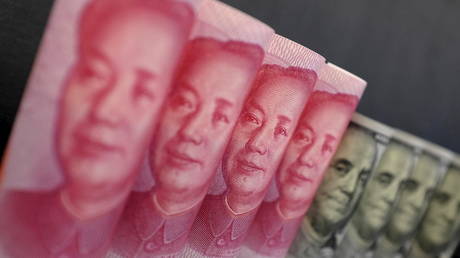 Beijing may be speeding up the diversification of its foreign exchange reserves away from US dollar assets in response to Washington’s potential sanctions, the South China Morning Post reported, citing analysts.

Data from the US Department of Treasury shows China cut its holdings of US government debt for three consecutive months to $1.07 trillion in late August, the lowest level since March 2017.The State Administration of Foreign Exchange (SAFE), China’s foreign exchange regulator, said in its most recent annual report that US dollar assets accounted for 58 percent of the nation’s reserves in 2015, unchanged from a year earlier. This means US dollar assets account for about $1.8 trillion of China’s total reserves of around $3.14 trillion.Meanwhile, experts point to signs that China might be ramping up diversification of its reserves’ portfolio.The country’s purchases of Japanese government bonds hit a three-and-a-half-year high this year, reaching 1.46 trillion yen ($13.82 billion) from April to July. That is 3.6 times more than a year earlier.

China’s Global Times tabloid reported last month, citing analysts, that Beijing could cut its holdings of US Treasury bonds by 20 percent to $800 billion.According to Tan Yaling, president of the private think tank China Forex Investment Research Institute, changes to China’s foreign exchange reserves were part of “a process of diversification” adopted years ago by the foreign exchange regulator. “We shouldn’t pursue a radical approach to de-dollarization – it does no good,” Tan said.He Qing, from the Renmin University of China, said recently that “if China’s access to the US dollar is restricted, it would impact China’s overseas investment, foreign exchange reserve operations and lead to larger fluctuations of the yuan exchange rate in the short term.”At the same time, some Chinese researchers argue the greenback’s role as the primary currency for international payments is waning.The executive dean of Chongyang Institute of Financial Studies, Wang Wen, said that monetary easing by the US Federal Reserve is undercutting confidence in the US dollar as the world’s dominant currency.

The ongoing trade conflict between the United States and China and sanctions against Beijing’s biggest trading partners have forced China to take steps towards relieving the dollar dependence of the world’s second-largest economy. The People’s Bank of China has been regularly reducing the country’s share of US Treasuries. China has been also pushing to internationalize its own currency, the yuan, which was included in the IMF basket alongside the US dollar, the Japanese yen, the euro and the British pound. Beijing has lately made steps towards strengthening the yuan, including accumulating gold reserves, launching yuan-priced crude futures and using the currency in trade with international partners.For more stories on economy & finance visit DHT’s business section

This gravity-fed charcoal grill cooks with tons of barbecue flavor