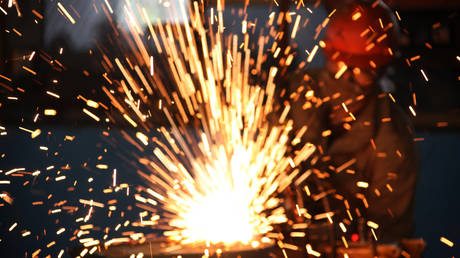 Activity in China’s manufacturing sector accelerated at the fastest pace in nearly a decade in October as domestic demand surged. A private business survey showed on Monday the economy is quickly recovering from the Covid crisis.

The Caixin/Markit Manufacturing Purchasing Managers’ Index (PMI) rose to 53.6 from September’s 53.0. The reading was above analysts’ expectations and the highest since January 2011. The 50-threshold separates growth from contraction.China’s vast manufacturing industry has been recovering and steadily returning to levels seen before the pandemic. The October Caixin/Markit PMI showed that the country’s manufacturing recovery has continued to pick up speed, said Wang Zhe, senior economist at Caixin Insight Group. “Recovery was the word in the current macro economy, with the domestic epidemic under control. Manufacturing supply and demand improved at the same time.”

The Caixin survey showed that total new orders surged to the highest level since 2010. The gauge for new export orders fell from the month before, though it remained in expansionary territory.“The second wave of coronavirus infections in Europe and the third wave in the US have significantly suppressed China’s overseas demand,” said Wang.The survey also showed Chinese factories hired workers for the second month in a row, though the increase was slight. Factory output also rose slightly from the month before, while a gauge of business confidence rose to a multi-year high.The Caixin survey focuses more on small and export-oriented firms while China’s official survey, which was released on Saturday, largely tracks large companies and state-owned enterprises.

According to the official gauge, factory activity expanded at a slightly slower pace in October, but it was above analysts’ expectations. “There are still many uncertainties outside of China, so policymakers need to be cautious about normalizing post-coronavirus monetary and fiscal policies,” said Wang.For more stories on economy & finance visit DHT’s business section

If you missed the first deadline, you can still claim a $500 stimulus catch-up check for your kids