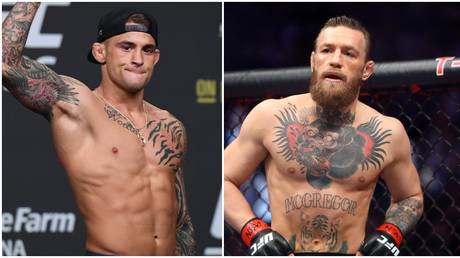 Conor McGregor’s rematch with rival Dustin Poirier will take place in the lightweight fold after the Irishman appeared to confirm on Friday that he will fight for the first time at 155lbs since his loss to Khabib Nurmagomedov.

Speculation had persisted as to which weight class the fight would take place in after McGregor’s most recent performance, last January’s win against UFC veteran Donald Cerrone, took place in the welterweight division.

That particular decision was made after both fighters agreed in advance to spare themselves a significant weight cut ahead of the bout, but with McGregor’s rematch with Poirier having significant ramifications in a division which could soon be in search of a new champion following Nurmagomedov’s recent retirement announcement, the Dubliner appears primed to return to the UFC division in which he once held the world title.

“Fresh out of the McGregor FAST Laboratory today,” McGregor wrote on Instagram accompanying a video detailing him reach his ‘target weight’ of 155lbs. “Full body composition scan complete and the results came back = Lightweight Division incoming.”

McGregor, who is the only fighter in UFC history to score knockout wins in the featherweight, lightweight and welterweight divisions, will return to action after announcing what was his third retirement from mixed martial arts this year, but now appears motivated to regain the lightweight championship he originally won from Eddie Alvarez during the UFC’s New York City debut event in Madison Square Garden in November 2016.

The McGregor-Poirier rematch – which has yet to be officially confirmed by the UFC – marks the second time the two fighters will have met following their first encounter at UFC 178 in September 2014.

On that occasion, McGregor won the first by TKO less than two minutes into the first round in what was his third fight with the organization. The win confirmed to many observers McGregor’s candidacy as a legitimate world title threat.

Further speculation persists that the fight could be potentially be made into a fight for the UFC’s lightweight world title should Nurmagomedov’s retirement be confirmed. However, Dana White stated in the media on Friday that he hasn’t given up on the idea of convincing Nurmagomedov to return for one final fight for the opportunity to improve his record to an unparalleled 30-0.

The Haunting of Bly Manor ending explained, and all your questions answered