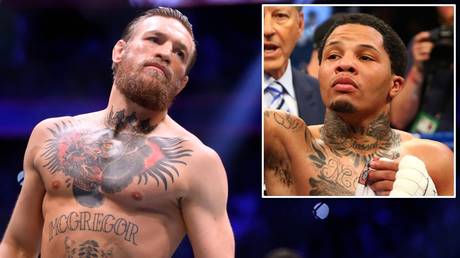 Conor McGregor was among those impressed by Gervonta Davis’ performance as the undefeated American defeated Leo Santa Cruz with a sensational sixth-round knockout in their world title fight in Texas.

The 25-year-old protege of Floyd Mayweather rubber-stamped the win with the stunning left-hand shot which crumpled the Mexican fighter to the canvas to confirm his 24th victory from 24 fights, defending his WBA lightweight title and claiming the WBA’s “super” world super-featherweight belt in the process.

Davis, a rising star in boxing circles, said afterwards that the win proves he is the best in the world and that he is ready to take on anyone who might disagree with that.

“I’m going to continue to show people all over the world that I’m the best,” Davis said after his win.

“I don’t have to call anybody else out. I’m the top dog. Just line them up, and I’ll knock them out one by one.”

Davis had previously vacated the WBA “super” world super-featherweight title last year so he could move up to fight Yuriorkis Gamboa for the WBA (regular) lightweight title. He won that last December by 12th round TKO.

And reacting to the one-shot KO of Santa Cruz, UFC star McGregor said that Davis displayed that he has some “serious venom” in his hands.

My lord! What a vicious uppercut that was. Praying for the health and safety of Santa Cruz there. The young man “Tank” Davis has some serious venom in that back hand shot. Incredible!@ProperWhiskey fight night 🥊

“My lord! What a vicious uppercut that was,” McGregor wrote on Twitter.

“Praying for the health and safety of Santa Cruz there. The young man ‘Tank’ Davis has some serious venom in that back hand shot. Incredible!“

McGregor is no stranger to Davis. The American fought in the co-main event of McGregor’s 2017 boxing match with Floyd Mayweather, where he defeated Francisco Fonseca by eight-round knockout.

McGregor is tipped to continue his boxing career next year and has been heavily linked to a bout with multiple-weight world champion Manny Pacquiao.