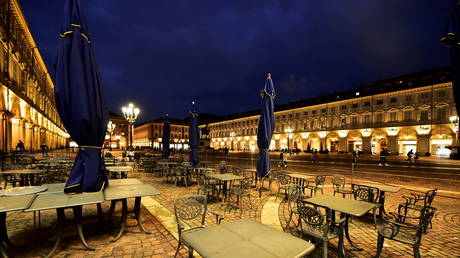 Italy’s prime minister has announced plans to introduce a nightly curfew on the entire country along with further measures including the closure of bars and museums, while shopping centers will be shut at weekends.

Giuseppe Conte said on Monday that the country will set a new nationwide curfew, running from 9pm until the following morning, amid soaring Covid infections. He warned that hospitals would be overrun in 15 of Italy’s 20 regions by next month unless the government intervened now.

In light of the latest report on Friday and the particularly critical situations in some regions, we are forced to intervene with a view to mitigate the contagion.

Speaking to the Chamber of Deputies, Conte said that they would also be dividing the country into three areas depending on the risk level, but national measures would be limited and specific.

Restrictions imposed on the whole of Italy include the nighttime curfew, limiting travel in and out of certain areas, as well as the closure of shopping centers at weekends. Meanwhile, museums, bars, video game halls and exhibitions will be forced to shut. Urban transport capacity will also be limited to 50 percent.

An official announcement is expected to be made to the public on Monday evening following the prime minister’s summit with regional officials during the day.

Details of the regional restrictions are not yet known, however, Deputy Labor Minister Francesca Puglisi has told Sky TG 24 that schools may be impacted.

“Unfortunately, we have to sacrifice direct teaching, and lessons will be taught online for all high school students, and it has not yet been decided whether lower elementary school students will follow classes from home,” said Puglisi.

Earlier in October, Conte’s government took measures to curb socializing both at homes and in public spaces, limiting the operations of bars, and sports and school activities. This was reinforced last week with the introduction of early curfew on cafes and restaurants and the shutting down of gyms and pools.

Italy was one of the first epicenters for Covid-19 in Europe and experienced a harsh lockdown in the first half of 2020. On Sunday, Italy registered 29,907 new infections, bringing the national tally to 709,335 since the pandemic began. A further 208 fatalities were also recorded, bringing the total deaths to 38,826.

Hands-on with T-Mobile TVision live TV: Worth $10 but not much more

Huawei ban timeline: Chinese company may build a chip plant due to US sanctions