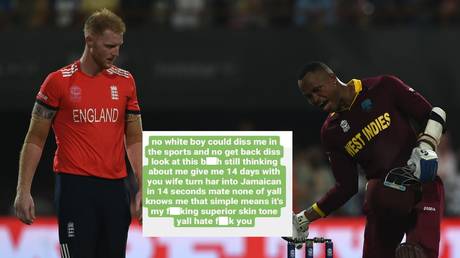 Cricket legends Shane Warne and Michael Vaughan have hit out at West Indies batsman Marlon Samuels after he called the former a “b*tch” and boasted of his “superior skin tone” in a racist tirade against England’s Ben Stokes.

After Stokes said he wouldn’t wish a two-week quarantine on his “worst enemy” Samuels, the Jamaican responded with an expletive-ridden and racist tirade against him in a since-deleted post on Instagram, in which he also made a derogatory comment about Stokes’ wife Clare.

“No white boy could diss me in the sports and no get diss back,” Samuel wrote on Instagram.

“Look at this b*tch still thinking about me. Give me 14 days with you wife turn har [sic] into Jamaican in 14 seconds. Mate none of y’all knows me that simple, means it’s my f*cking superior skin tone y’all hate f*ck you.”

In another post he also wrote: “ICC cricketing world Ben b*tch Stokes, Shane b*tch Warn [sic] and a few b*tch West Indians cricketers who sell out [his perfume range] sextillion7thpower is nothing to f*ck with my army bigger and we richer.”

“I’ve just been sent what Samuels has posted re Ben Stokes and I.” he wrote. “It’s a very sad situation as he obviously needs serious help-but has no friends at all and not even his ex teammates like him. Just because you were an ordinary cricketer-no need to be an ordinary person. Get help son.”

I’ve just been sent what Samuels has posted re @benstokes38 & I. It’s a very sad situation as he obviously needs serious help-but has no friends at all & not even his ex teammates like him. Just because you were an ordinary cricketer-no need to be an ordinary person. Get help son

Former England captain Vaughan also hit out at Samuels and stood up for his compatriot: “This is appalling Marlon Samuels… we are trying to stamp out racism … !! A bit of banter by ⁦Ben Stokes⁩ should not lead to this.”

Samuels has deleted those posts, but he has continued to fan the flames by posting screenshots of news stories covering Stokes’ 2018 trial after he was charged with affray for his involvement in a brawl outside a Bristol nightclub in 2017.

Stokes, who said he was defending a gay couple from homophobic abuse – which was verified by the couple – was acquitted of the charge.

There’s no love lost between Stokes and Warne and Samuels.

Warne and Samuels were involved in a heated confrontation when facing off in the Big Bash League in 2013 after the latter grabbed the shirt of Warne’s teammate David Hussey. Later in the same match, Warne threw the ball at Samuels whilst fielding, and Samuels responded by tossing the bat in his direction.

As for Stokes, he and Samuels have angered one another on several occasions, starting when the latter saluted the former after he was bowled out in a Test match in 2015 – Stokes subsequently applauded Samuels when he was dismissed.

The pair also confronted one another at the end of the 2016 World Twenty20 final, which the West Indies won after Carlos Brathwaite hit four sixes in a row from balls delivered by Stokes in the final over.

In his book published the same year, Stokes said Samuels “showed total disrespect for the game” with his conduct after the final and was “totally lacking manners.”