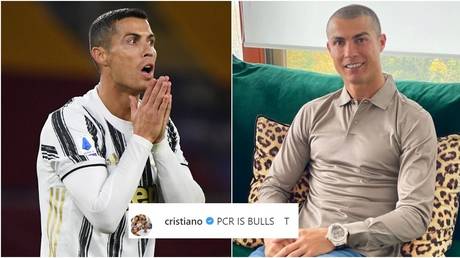 Cristiano Ronaldo has expressed his frustration after a third positive Covid-19 test ruled him out of Juventus’ UEFA Champions League clash with Barcelona and reportedly “feels like a beast forced to stay in cage.”

The Juventus star took to Instagram on Wednesday to tell his 241 million followers he is “feeling good and healthy,” but added in a subsequent (and since-deleted) comment: “PCR IS BULLS**T.”

The star was referring to the PCR (Polymerase chain reaction) test, which identifies the presence of genetic material from the virus.

The Portuguese star’s outburst follows a report from Italian outlet Tuttosport in which friends of the superstar revealed his frustration at missing out on the action while he quarantines, making him feel like “a beast forced to stay in cage.”

Ronaldo tested positive for the coronavirus for the third time on Tuesday, ruling him out of Wednesday’s crunch game at the Allianz Stadium.

The 35-year-old, who is said to be asymptomatic, has been in self-isolation since he initially tested positive for Covid on October 13 whilst on international duty with Portugal.

He missed his national side’s 3-0 win over Sweden the following day as he took a private air ambulance back to Italy.

Ronaldo returned a second positive test last Thursday. He needed to test negative at least 24 hours before Wednesday’s game, but Tuesday’s test did not return the desired result.

He has continued to keep followers updated during his recovery, and last week appeared to be in good spirits as he worked on an exercise bike alone at home.

Juve have somewhat struggled without him, however, having been held to back-to-back 1-1 draws against Crotone and Hellas Verona in Serie A during his absence.

The Bianconeri were able to beat Dynamo Kyiv 2-0 in the Champions League in between those games, but it doesn’t make for inspiring form as they head into Wednesday’s game without their star forward.

Ronaldo is the Champions League’s record goalscorer with 130 strikes to his name, and he has scored 18 times in 31 career meetings with Barca.

The best board games to give in 2020: Gloomhaven, Marvel United and more