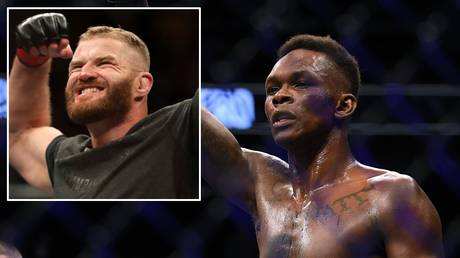 Reigning UFC middleweight champion Israel Adesanya has stamped his authority on the promotion’s 185-pound class, and now he’s set to fight for the promotion’s light heavyweight belt in an attempt to become a two-division champion.

Adesanya was sat at octagonside at the UFC Apex as he watched former opponent Anderson Silva lose out in his final fight in the octagon. And, after the event, UFC president Dana White revealed during the post-fight press conference that the New Zealander would be moving up to 205 pounds for his next fight.

“Listen, when the fight was over on ‘Fight Island,’ the last fight (at UFC 254), I was like, ‘I’m going to have to sit down with this kid (Adesanya) and convince him on why he needs to fight Whittaker,'” White told reporters.

“Whittaker comes out and says he doesn’t want to fight him – craziest sh*t I’ve ever seen. Yeah, there’s no arguing with Israel now. I thought Whittaker deserved the shot and Whittaker doesn’t want it, so yeah, we’ll let him do it.”

It means that Adesanya, who is undefeated in MMA with a record of 20-0, will challenge newly-crowned light heavyweight champ Jan Blachowicz for the 205-pound title.

Blachowicz captured the belt with a stunning second-round knockout of Dominick Reyes at UFC 253, and the powerful Pole has made no secret of his willingness to face Adesanya or former light heavyweight champion Jon Jones. Now he has landed a huge fight for his first title defense as UFC champion as he lines up against Adesanya in a champion-versus-champion clash.

No date or venue has been confirmed for the matchup so far, but it seems the bout will feature as one of the main event clashes early in 2021.