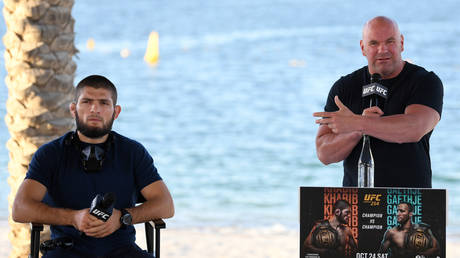 UFC boss Dana White has suggested that lightweight champion Khabib Nurmagomedov could be tempted back into the octagon despite the Russian’s announcement that he was retiring following his victory over Justin Gaethje at UFC 254.

Fighting for the first time since the death of his father and trainer Abdulmanap, an emotional Khabib broke down in the octagon after submitting Gaethje in the second round of their lightweight title fight in Abu Dhabi last weekend.

The undefeated Russian laid down his gloves and revealed he had made a vow to his mother that it would be his last ever contest, after improving his unblemished record to 29-0.

The announcement took the MMA world by surprise – including Khabib’s own coach, Javier Mendez, who confessed he had no idea that the lightweight king was going to call it quits.

READ MORE: ‘He was all over the place’: Khabib coach suggests ’emotional’ UFC star could reverse retirement decision

UFC supremo White was also left stunned, but now says he has talked to Khabib in recent days and has a feeling it’s not the last we have seen of The Eagle inside the octagon.

“I’ll tell you this, and I haven’t told anybody this yet, but Khabib and I have been talking,” White told Zach Gelb on CBS Sports Radio on Thursday.

“He was completely emotional that night when he got through that fight. I have a feeling that he might go for 30-0.”

“I think that he’s not going to retire. His dad wanted him to get to 30-0, and I think he wants to honor his dad’s wish.”

The 30-0 mark was one Abdulmanap Nurmagomedov had spoken of in recent years as a target before his tragic death in July from complications stemming from a coronavirus infection.

In the lead-up to UFC 254 much of the talk had been around who Khabib could face after Gaethje, with retired Canadian legend Georges St-Pierre a prominent name in the discussion.

White said before UFC 254 that he had something “special” lined up for Khabib should he overcome Gaethje, but declined to say on Thursday what that might be.

“I haven’t even said it to [Khabib], so I’m not going to say anything,” the UFC boss told CBS.

Returning to Russia this week, the 32-year-old Khabib reiterated that his decision to walk away from the octagon was final – but admitted the announcement so soon after his victory over Gaethje had even taken his mother by surprise.

Unemployment money and more: These 5 benefits could go up in smoke with stimulus delay