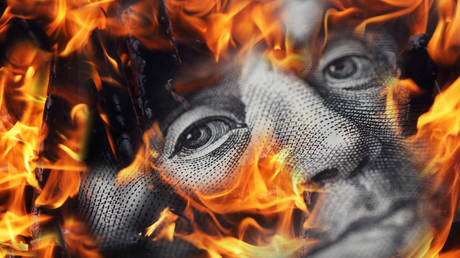 As markets begin to handicap the US presidential race, they seem to be viewing a Biden win as a positive for the stock market, which doesn’t really make sense, according to economist Peter Schiff.

“Donald Trump being president was bullish for stocks because of what Trump was doing – if Biden was threatening to undo all that, and to increase taxes and have more regulation – you would think that Wall Street would think that’s a negative,” he said on his latest podcast.Schiff talked about the Bank of America’s (BoA) best-case scenario for the stock markets, which is a Democratic Party clean sweep. With this outcome, there certainly would be corporate tax increases as well as more regulatory red tape with Democrats in complete control, he said. None of that would be good for the economy, but the reason BoA likes that outcome is that it would likely mean the most fiscal stimulus, Schiff believes.“What we want is no gridlock. We want the same party controlling Congress. And since there’s no way the Republicans are going to get the House, the only way to have clear sailing, no gridlock at all, to have the most amount of stimulus go through Congress and get signed by the president is if we have a Democrat sweep.”

He goes on: “And so even though the Democrats are going to raise taxes, this is still good for the stock market. Because this analyst realizes that the Fed and the stimulus trumps earnings. Earnings are secondary. The main game is stimulus. It’s the Federal Reserve that is playing the music that everybody on Wall Street is dancing to. And so, what this analyst is saying is we just need more of this music. The party is going to rage on if we get more stimulus.”Schiff said this proves that they know the entire stock market boom is artificial. He agrees that the Democrat sweep scenario might be good for the stock market, at least in the short-run, but says it’s the worst possible outcome for America and for the dollar.“The dollar is going to get killed. All that stimulus, all the deficits that are going to be the result of no gridlock – the traffic is going to flow, meaning the red ink is going to flow. And so that is definitely the worst outcome for the dollar.”READ MORE: Stock markets will fall dramatically if US election results contested, Mark Mobius warnsAccording to the economist, “Anything that slows down what government wants to do is a positive. Because government wants to do harm. Government wants to damage the economy. So, to the extent that a divided government minimizes the damage, that’s a positive.”For more stories on economy & finance visit DHT’s business section

Germany's ex-royals want their riches back, but past ties to Hitler stand in the way