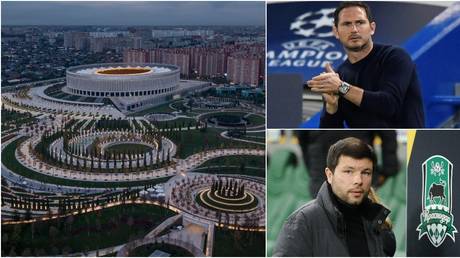 Krasnodar are preparing for the biggest night in the club’s fledgling existence as they welcome Chelsea in the Champions League on Wednesday night.

Frank Lampard’s team will have the honor of being the first visitors for a Champions League group game at Krasnodar Stadium, the impressive Colosseum-style home of the club from the south of Russia.

Krasnodar are appearing in the group stages of Europe’s elite competition for the first time, just 12 years after the club was founded by local billionaire businessman Sergey Galitsky.

The retail magnate has built an infrastructure – including 35,000-seater stadium, ultra-modern academy and surrounding park – which is the envy of Russia, and which is bearing fruit as the club take their their first steps on the grandest of stages.

Chelsea arrived in the southern Russian city – located around 100km inland from the Black Sea coast – on Tuesday and trained at Krasnodar Stadium before their Group E fixture on Wednesday.

UEFA coronavirus protocols mean the area will only be 30 percent full when the players take to the pitch, but such is the buzz surrounding the historic game in Krasnodar – a city of just over 1 million – that tickets sold out almost as soon as they went on sale.

Unfortunately for 36-year-old Krasnodar manager Murad Musaev, he has to contend with an injury-hit squad which has denied him any chance of him fielding his strongest XI for the visit of the Blues.

French midfielder Remy Cabella – who may be familiar to Chelsea fans from his Premier League stint with Newcastle – has been ruled out after a positive Covid-19 test.

Russian full-back Sergey Petrov is out with a long-term hamstring injury, while Musaev said in his pre-match press conference on Tuesday that he would leave it late to decide on other key injury concerns.

Krasnodar fans will have been heartened by seeing influential Brazilian winger Wanderson return to training on Tuesday night after a month out with a muscle injury, while Swedish pair Kristoffer Olsson and Marcus Berg could also feature after missing the 3-1 defeat at the weekend to Spartak Moscow – a game which saw Chelsea loanee Victor Moses score for Krasnodar’s rivals.

Viktor Claesson, another of Krasnodar’s Swedish contingent, is not expected to be fit for the visit of Chelsea.

Krasnodar coach Muasaev himself missed the opening 1-1 Champions League group stage draw at Rennes due to illness, but will at least be back on the touchlines on Wednesday.

Despite the injury woes he will be able to call on several key players, including highly-rated 21-year-old goalkeeper Matvei Safonov, who is perhaps the club’s best example of bringing through talent from its impressive academy set-up.

Krasnodar have experience in the likes of veteran Belarusian center-back Aleksandr Martynovich, who could line up alongside Brazil’s Kaio at the back.

While he may not start, 20-year-old winger Magomed-Shapi Suleymanov – another academy graduate – has already illuminated the continent with some spectacular cameos in the Europa League.

Fellow youngsters Leon Sabua and Daniil Utkin are also ones to watch and the attacking duo could be called on against the Londoners.

With a reputation for a forward-thinking ethos and entertaining style, Krasnodar will not try to bully Chelsea into submission, but rather attempt to go toe-to-toe in attack.

They have, however, endured a ropey start to the domestic season, currently languishing eighth in the table, losing four of their opening 12 games.

The Russians finished third last season, and reached the Champions League proper for the first time after beating Greek side PAOK in a two-legged playoff in September.

Unlike his counterpart in the Krasnodar dugout, Chelsea boss Lampard has no such injury headaches for Wednesday, even though he will be without Kepa Arrizabalaga and the suspended Marcos Alonso – neither of whom would have been expected to feature anyway.

Brazilian center-back Thiago Silva has not travelled to Russia, with Lampard likely keen on managing game time for the 36-year-old star.

Silva’s absence could provide the chance for Antonio Rudiger to make a rare start after Lampard signaled in his pre-match comments in Russia on Tuesday that he was not attempting to freeze the German out, despite reports to the contrary.

Lampard – who was a Chelsea player the last time the club traveled to Russia, for a Europa League quarter-final against Rubin Kazan in 2013 – can call on an embarrassment of attacking riches against Krasnodar, having seen Hakim Ziyech and Christian Pulisic return from injury in recent weeks to complement the threat from recently-arrived German duo Timo Werner and Kai Havertz.

Like Krasnodar, Chelsea drew their Group E opener, in their case 0-0 against Sevilla at Stamford Bridge.

That was a rare clean-sheet for Lampard’s men and was followed by another goalless draw against Manchester United at the weekend.

In Russia, Lampard is likely to line up with a more attack-minded 4-3-3 as he goes in search of a first group stage win, in a game in which they will be heavy favorites for victory.

One thing Chelsea will not have to contend with is the stereotype of frigid temperatures in Russia in late October: due to its southern location, Krasnodar is forecast to be a balmy 20C around kick-off time.