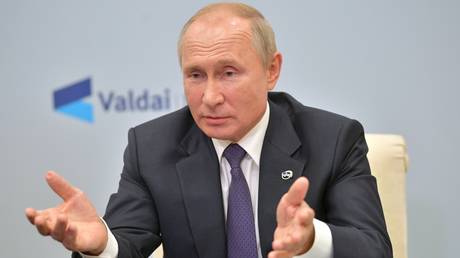 Vladimir Putin is poised to step back from the Russian presidency after being diagnosed with a neurological condition. That’s according to a Moscow commentator who once claimed membership of a shadowy, secret intelligence group.

The explosive suggestion, made by political scientist Valery Solovey, was covered widely in US and UK news on Friday. Outlets including the Sun, the Daily Mail and the New York Post ran the story that Putin has been diagnosed with Parkinson’s disease. The tabloids, among the most read in the West, suggested that the president would stand down next year.

Solovey has become a regular commentator in the anglophone media, particularly after stepping down from his role as Chair of the Public Relations Department at the Moscow State Institute of International Relations (MGIMO). He argued he had been pushed out, apparently “for political reasons.” The gabby conspiracy theorist is beloved of British and American hacks in Moscow as he will pretty much say anything to suit their agendas.

In the past, Solovey has claimed “associate membership” of a shadowy international organization, more powerful than national governments. In an interview with Ukrainian journalist Dmitry Gordon, he described this group as “stronger than the Federal Security Service (FSB), stronger than the Foreign Intelligence Service (SVR), and stronger than Russia’s Military Intelligence (GRU).”  He added that it is “not an occult organization,” and has nothing to do with the Templars and Freemasons.

Solovey has made almost identical allegations in the past, which failed to materialize. In 2016, he was quoted in the Daily Mail, Britain’s leading non-red top daily, as saying that Putin would shortly stand down due to ill health. Then, in an interview with the Independent in 2017, he asserted that Putin had again been on the verge of quitting.

The commentator again made headlines earlier this year when he alleged that Moscow had developed a secret coronavirus cure, which was only being made available to those “who are very close to the Kremlin, and to Mr Putin.” No evidence has been presented to support these claims, and Russian commentators have repeatedly, and with growing exasperation, pointed to the frequency with which Western media uses discredited and marginal voices in its coverage of the country.

Indeed, for all the wailing about ‘Russian disinformation’ in the US, UK and EU, in reality, the bigger problem appears to be Western disinformation about Russia.

The speculation around Putin’s health comes as a bill is introduced in parliament that would offer total legal immunity to former holders of the top job. This has drawn suggestions that the president might look to take a step back from the role in the near future.

However, the Kremlin’s spokesman Dmitry Peskov has rejected Solovey’s claims outright. On a call with journalists on Friday morning, he told reporters that “Putin is not going to resign – he is in excellent health.”