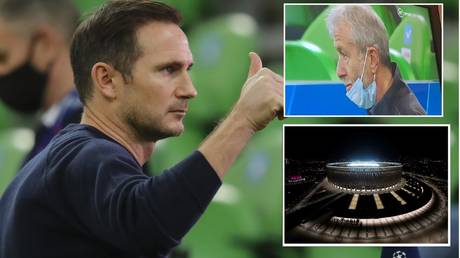 Chelsea owner Roman Abramovich has taken the rare opportunity to watch his team as they travelled to the south of Russia to face Krasnodar in the Champions League.

Abramovich was spotted by TV cameras at Krasnodar Stadium, where Chelsea have the honor of being the first ever visitors for a Champions League game.

Krasnodar – who were founded just 12 years ago by their own billionaire owner, local retail magnate Sergey Galitsky – are making their debut in the group stages.

Abramovich has been something of an absent owner for Chelsea since suffering UK visa woes in the fallout from the Skripal spy poisoning in 2018, not being seen at Stamford Bridge for around two years.

He was spotted in attendance at the Europa League final against Arsenal in Baku in May 2019, and was also seen at a friendly against RB Salzburg in Austria later that year.

TV cameras picked up the oligarch at Krasnodar Stadium on Wednesday night, with a mask resting on his chin.

The rare appearance by their billionaire benefactor was welcomed by the Chelsea faithful.

Roman Abramovic in the building? Man I miss the days when he sat on top watching the players at Stamford Bridge, glad to see the king back.

Big Roman Abramovich in the house!

In line with UEFA Covid-19 regulations, a limited number of fans have been allowed into the stadium to watch the Group E clash in southern Russia.

Abramovich will get the chance to look at manager Frank Lampard’s men first-hand, and in particular summer arrivals such as Timo Werner, Kai Havertz and Hakim Ziyech, who arrived as part of a £200 million-plus summer spending spree.

The trio were all named in a strong starting XI by Lampard, who also handed rare starts to England ace Callum Hudson-Odoi and German centre-back Antonio Rudiger.

Krasnodar manager Murad Musaev has been hit with an injury and illness crisis, but was able to welcome back Swedish forward Marcus Berg and countryman Kristoffer Olsson to the starting line-up.

Abramovich will not be the only billionaire in attendance, as Krasnodar founder Galitsky will also be watching proudly from the stands.

He founded the club in 2008 and has since plowed upwards of $400 million into infrastructure including a stunning 35,000-seater stadium, a state-of-the-art youth academy and stunning park surrounding the facilities.

Apple Arcade's South of the Circle redefines the adventure game

Best mobile games to play this Halloween while you're stuck inside