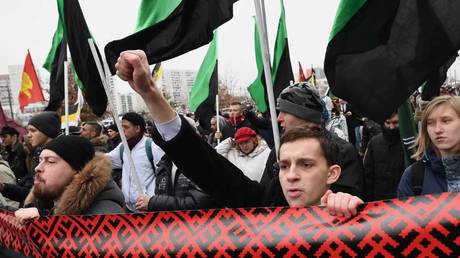 An unauthorized rally was broken up by Moscow police on Wednesday, with between 30 and 40 ultranationalist marchers detained. Held to coincide with National Unity Day, the event has previously been co-organized by Alexei Navalny.

While the protest, known as the ‘Russian March’, has become an annual fixture for the far-right, Moscow city officials this year refused to grant the necessary permits for it to take place, citing the coronavirus pandemic. The promoters had also sought to secure support for a simultaneous march in Nizhny Novgorod, another large city some 400km east of the capital, which was similarly turned down.

The march, which takes place on the country’s least understood national holiday, has drawn criticism in the past for alleged xenophobia and racism. In 2014, for example, masked activists in camouflage gear vented frustration at migration policies with chants of “Russian for Russians.” Nazi salutes and the flying of black, yellow, and white Imperial Russian flags have also been widely reported.

Opposition figure Alexei Navalny, who made international headlines after he was allegedly poisoned in August, has been involved in organizing the march in previous years. In 2011, he attempted to leverage the event as a rally in opposition to the Kremlin, telling crowds, “Let’s make it so that those bastards like [the late Boris] Berezovsky, who started United Russia, and [Roman] Abramovich, who’s together with [President Vladimir] Putin … are afraid of us.”

Among those arrested on Wednesday were Dmitry Mikhailov, an event coordinator, and Olga Sapronova, a blogger for online opposition channel Gradus TV. Further arrests of those involved in planning the illegal demonstration are said to have taken place elsewhere in the city.

Moon's 'long-lost twin' is following Mars around like a puppy