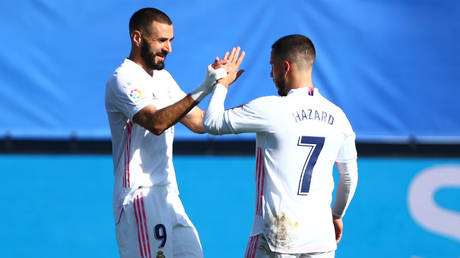 Real Madrid might finally be seeing a return on their investment more than a year after the big-money purchase of ex-Chelsea star Eden Hazard as he scored just his second Real Madrid goal in Saturday’s La Liga clash with Huesca.

The Belgian star has endured a stop-start beginning to a Bernabeu career which has been interrupted by injury and accusations of him being overweight, but the stunning solo strike – which comes more than a year after his first goal for the club – will go some way to easing the Madrid faithful’s concerns.

Five minutes before halftime, Hazard received the ball near the halfway line and after manufacturing space for himself drove forward to unleash an unstoppable 25-yard drive past the despairing lunge of Andreas Fernandez.

It was a goal which brought back memories of Hazard’s impeccable spell in West London with Chelsea where he was four times named the team’s Player of the Year.

And a quick look as social media shows that more than a few Madridistas have breathed a collective sigh of relief as the apparent return to form of their record signing following his £89 million (€99 million / $115 million) transfer from the Premier League.

Hazard’s sensational solo strike adds to what has been a great day for Real Madrid as a further brace from Karim Benzema and a single strike from Federico Valverde was enough to confirm a 4-1 win at home to lowly Huesca, who could only manage a consolation through David Ferreiro.

The win takes Real Madrid to the summit of the La Liga standings, two points ahead of second placed Real Sociedad. They are five points clear of city rivals Atletico (who have played two games less) and nine points ahead of 12th place Barcelona, who also have two games in hand.