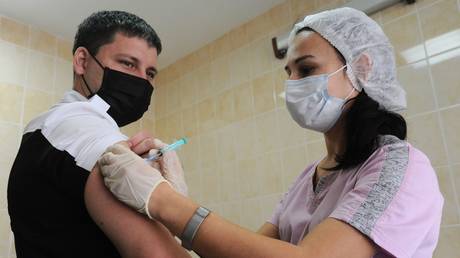 “Undoubtedly, we will use our close ties to gain access to the [Russian] vaccine,” Shoukry told the Russian TASS news agency, on Monday.

The Egyptian diplomat confirmed he had talked about the option to launch joint manufacturing with Russian Trade Minister Denis Manturov during his visit to Moscow last week.

“Egypt has a powerful private sector, manufacturing capabilities, and pharmaceutical industry. These issues will be further discussed by our health, industry and trade ministers,” Shoukry stated, adding that it was too early to give a concrete date on which the Moscow-created vaccine might arrive in Cairo.

In September, the Russian Direct Investment Fund, which funded the development of the anti-coronavirus formula, struck a deal with Pharco, Egypt’s leading pharmaceutical company, to supply the Arab country with 25 million doses of its Sputnik V vaccine.

On Thursday, Manturov said more than 30 countries had expressed interest in acquiring the vaccine from Russia, while India, the UAE, Venezuela, and Belarus were participating in its clinical trial.

Russia became the first nation to authorize the use of a Covid-19 vaccine in August. Sputnik V has since entered its crucial phase-three trial. The country’s second vaccine, dubbed EpiVacCorona, was registered last month.