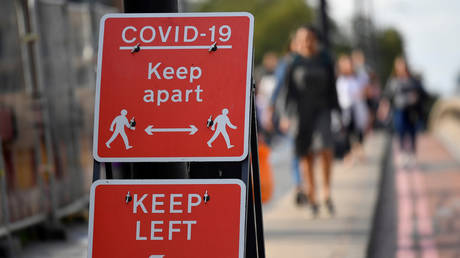 The British Chancellor has stressed that the four-week coronavirus lockdown is time-limited and that England will return to a tiered system in December, contradicting comments made by cabinet colleague Michael Gove on Sunday.

Chancellor of the Exchequer Rishi Sunak told BBC 4 on Monday morning that the new lockdown restrictions in England will expire on December 2, “as a matter of law” and that England will return to the tiered lockdown system.

Sunak claimed that the new lockdown, which starts on Thursday and will last for four weeks, should be sufficient to bring the R number down and control the virus. He added that if the government hadn’t intervened, hospitals would have been overwhelmed and the peak mortality rate would have been higher than that of the first wave.

Our hope and expectation is, on the basis of everything we know today, that these measures will be sufficient to bring the R rate to where we need it to be. And, therefore, we can exit back into the tiered approach.

The chancellor also stated that the government’s furlough scheme, which was due to end on October 31, would be extended until December, “to give businesses that ease at this difficult time.”

Sunak’s comments largely contradict those of cabinet minister Michael Gove on Sunday. Gove claimed in an interview that England’s lockdown could be extended throughout December if the infection rate doesn’t go down, adding that all decisions would be based on “evidence.”

On Saturday, British Prime Minister, Boris Johnson announced that England would be plunged into a four-week lockdown from Thursday, as cases mount around the country. Some parts of the UK, including Wales, are already in a state of lockdown, whilst England had been subject to a three-tier system of Covid restrictions.

Johnson’s announcement came as the UK surpassed one million registered Covid cases on Saturday and reports that many hospitals across England’s north were already at maximum capacity.

Eddie Hassell, 'Surface' and 'The Kids Are All Right' actor, killed in Texas shooting