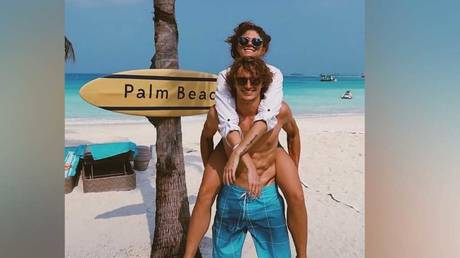 Olya Sharypova, ex-girlfriend of Alexander Zverev, has hit back at the tennis star after he said her allegations of domestic violence against her are “simply not true.”

The former junior tennis player has accused the German of hitting her head against a wall and attempting to suffocate her with a pillow during the US Open last year.

After Zverev issued a statement denying the allegations on social media, Sharypova wrote in an Instagram Story: “My story just started. ‘Simply not true.’ I don’t know if you wrote it or whoever is handling your Instagram, but to this day you had no courage to explain yourself directly.

“Because I’m not lying and we both know it. I’m not afraid to tell the truth, are you?

“I want to show all men, that let themselves act badly towards women, that we are not an accessory, we are not +1, we are not dolls, you can’t do whatever you like.

“And if you thought I’d be quiet after all I’ve been through in that relationship, you were wrong. You failed to give me answers personally. So I did the same.”

The Russian photographer made the allegations in an Instagram post on Wednesday, although she did not name Zverev in them.

In the post, the 23-year-old said that during an argument he “tried to suffocate me with a pillow, hit my head against the wall, twisted my hands and at that moment I was really afraid for my life.”

She said her head was hit against the wall “with so much power that I sat on the floor.”

“This was far from the first and not the last situation when I was raised in a relationship,” she added. “It was the scariest because at some point I couldn’t breathe.”

Sharypova later confirmed to Russian outlet Championat that she was referring to the world No. 7 in the post.

She also alleged the argument between them began when Zverev got angry with her for taking too long whilst on a walk with Daria Medvedeva – the wife of his fellow tennis star Daniil Medvedev – and her friend.

“Good on Olya for opening up,” she wrote. “It would have been pretty scary! I just hope that she can handle all the negativity and what’s to come next. #ibelieveOlya #WhyIStayed except #whySheStayed #stopviolenceagainstwomen”

On Thursday, Zverev released a statement on Twitter in which he described the accusations as “unfounded.”

“They make me very sad,” he wrote. “We have known each other since we were children and shared many experiences together.

“I very much regret that she makes such statements because the accusations are simply not true.

“We had a relationship, but it ended a long time ago. Why Olga is making these accusations now, I just don’t know.

“I really hope that the two of us will find a way to deal with each other again in a reasonable and respectful way.”

In his statement, Zverev also said he is looking forward to becoming a father for the first time after another of his ex-girlfriends, Brenda Patea, revealed to Gala Magazine she is pregnant with his child, which she is seeking sole custody of.

The 23-year-old said he and Patea “have a good relationship” and he will “live up to my responsibility as a father.”

In an Instagram story, the model said she had “received a lot of negative messages that hurt me a lot, with claims that are simply not true” in regards to her seeking sole custody of the child, which she reiterated she is doing “with good reasons, but they are private.”

Patea also said she was was not in contact with the player, but added: “I want to state very clearly on here that if he seeks contact with the child, I will not forbid it, on the contrary!”

It has been a turbulent year for Zverev, who reached his first Grand Slam final at the US Open in September, where he was beaten by Dominic Thiem.

Earlier this month, he exited the French Open in the fourth round at the hands of Jannik Sinner and drew criticism after the match when he revealed he had played whilst feeling ill with Covid-19 symptoms.

In June, Zverev was filmed attending a crowded party in Monte Carlo, Monaco, less than a week after he participated in the Adria Tour, in which four players including world No. 1 Novak Djokovic tested positive for the coronavirus.