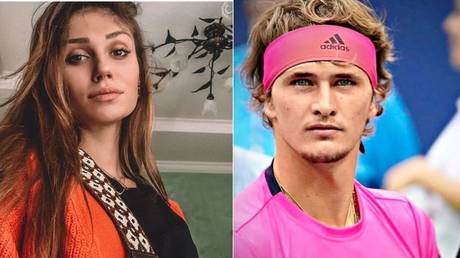 German tennis star Alexander Zverev has been accused of physical abuse and brutality by his former girlfriend Olga Sharypova, who claims she was beaten by the athlete during their relationship.

In an interview with Russian outlet Championat, Sharypova – who dated Zverev for several years – detailed the abuse she allegedly suffered at the hands of the player, saying that he tried to “strangle her with a pillow” and “smashed her into a wall.”

Sharypova said she constantly quarreled with Zverev, but one of their arguments snowballed into a nightmare which forced her to run barefoot away from a New York hotel.

According to Sharypova, the incident happened in summer 2019, just days before the start of the US Open.

Zverev’s ex-girlfriend said she spent time together with Daniil Medvedev’s wife Darya and returned to the hotel a little bit later than she had planned. Zverev was apparently not pleased with her late arrival and confronted her, which escalated into a real fist fight.

“He tried to suffocate me with a pillow, he twisted my arms,” Sharypova claimed. “I tried to run away from the hotel room, but he stopped me several times. He was afraid that someone would see me or hear my screams. Finally, I managed to get out being barefoot and having just a phone with me.”

“At first, I was hiding inside the hotel, but Sasha managed to find me. He wanted me to go back to the room and talk. But of course, I realized there would be no calm dialogue between us at that moment. I was utterly scared and wanted to run away from him. And then he pushed me into the wall and said he will go unpunished for that.

“He said that no one would care no matter what he would do to me. Fortunately, some people entered the hotel and I went out. I was standing barefooted in the middle of the street. Luckily, I had my phone with me, so I messaged my friend who brought me to his family.”

Sharypova alleged this was not the only episode of abuse she suffered at the hands of the world number seven, outlining that arguments and fights happened on a regular basis.

“This was not the first situation (when he beat me), there were many. But every time I tried to forget everything, blaming myself for all the fights. But what happened last August really frightened me, I was scared for my life,” she added.

Sharypova said she kept silent for a year because she was terrified, but has now decided to go public with the shocking revelations to make sure Zverev knows that his alleged actions have consequences.

Europe could be facing a double-dip recession

Apple One subscription bundle: Here's everything included and how to sign up today