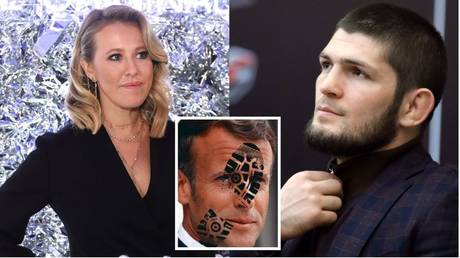 Russian celebrity and former presidential candidate Ksenia Sobchak has condemned Khabib Nurmagomedov for his verbal attack on the French leader Emmanuel Macron, which she suggested could be interpreted as a call to violence.

The famous TV personality left a comment under a social media post by the UFC lightweight champion in which he lashed out at Macron.

Socialite Sobchak, who ran against Putin for the presidency in 2018, told Khabib that he is a ‘role model’ for millions of people and suggested his criticism of Macron could carry violent consequences.

“Khabib, you are a hero for many young people in Russia who treat you as a role model. Recently you made many Russian people proud of their country because of your win,” Sobchak wrote.

“I respect your religious devotion, you have the right to believe and to love whoever you want. But don’t you think that your recent comments directed at the French president might be interpreted as an instigation of violence against Macron? Even though he has never spoken against Muslims, he just condemned Islamic radicalism and terrorists who committed murders – which are regarded as deep sins in the Koran, aren’t they?

The UFC lightweight champion had savaged Macron amid mounting tensions in France over religion and freedom of speech, after satirical magazine Charlie Hebdo posted cartoons of the Prophet Muhammad.

Khabib – a devout Muslim who hails from the Republic of Dagestan – shared his disgust at the French president on social media, accusing him of insulting Muslims by defending Charlie Hebdo’s right to publish the cartoons.

“May the Almighty disfigure the face of this scum and all his followers, who, under the slogan of freedom of speech, offend the feelings of more than one-and-a-half billion Muslim believers. May the Almighty humiliate them in this life, and in the next. Allah is quick in calculation and you will see it,” Khabib wrote in Russian, accompanying the text with a mock-up image of an imprint of a boot on Macron’s face.

On Thursday, France was shocked by yet another terrorist attack after a knifeman killed three people in a church in the southern city of Nice.

Two weeks earlier, schoolteacher Samuel Paty was beheaded by a radicalized Chechen refugee just outside Paris after he showed his class cartoons of the Prophet Mohammed during a lesson on free speech.

Russian MMA star Magomed Ismailov had also added his weight to the row over Macron’s Islam comments, hitting out at Sobchak after she called the French president “my hero.”

Absolute Championship Akhmat powerhouse Ismailov shot a volley of abuse at the Russian former politician, calling her a “stupid animal” over her support for Macron.

NO U! Trump & Biden camps accuse each other of seeking to STEAL election with premature victory claims & vote count lawfare — DHT USA News