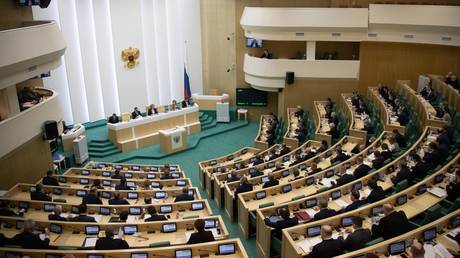 As part of a package of bills, Vladimir Putin has submitted a draft law to parliament which would allow former Russian presidents to become senators for life after leaving office, and also appoint seven other lifers to the body.

They would have to be people who have given “outstanding service to the country, in the state or public fields,” according to the proposals. Ex-presidents would also be able to appoint 23 other senators for shorter, six-year terms.

The reforms follow public approval of constitutional amendments over the summer, and may be interpreted as a sign that the groundwork is being laid for an eventual transition of power in Russia.

The president would have three months after departing office to apply for the position in the Federation Council, according to the proposal. The institution, Russia’s upper legislative house, currently has 170 members, and has been chaired by Valentina Matviyenko since 2011.

According to the draft law, “On the procedure for forming the Federation Council,” the body will include two representatives from each of the country’s 85 regions (one from the legislative and executive authorities), a former president of Russia after leaving his post, and no more than 30 representatives chosen by him or her, with up to seven appointed for life.

To become a senator, a former president has only three months to apply after departing the Kremlin. The submission also outlines requirements to be met by all the senators. They should be over 30 years of age; have an outstanding reputation; permanently live in Russia and not hold citizenship or a residence permit in another country. They would also be disqualified for 15 years if they had convictions for serious crimes, and five for less severe offenses.

Amendments are also being made to the law “On the status of a member of the Federation Council and the status of a deputy of the State Duma.” Going forward, a senator’s term can be terminated early if it turns out that they had foreign citizenship or did not comply with the requirements for a period of residence in the region from which they were appointed.

The amendments to the Russian Constitution were approved by a nationwide vote on July 1 and came into force on July 4. Earlier this week, parliament (the State Duma) passed a new law which means the president will be able to appoint a prime minister only after his or her candidacy is approved by its members. It must also approve the appointment of members of the cabinet.

Worlds 2020: Surviving two weeks of isolation ahead of the biggest esports tournament