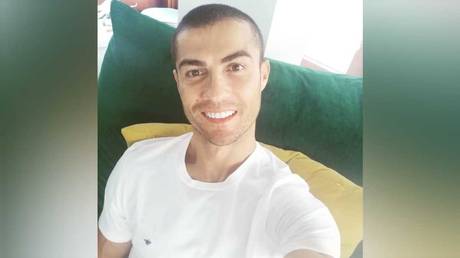 Fans have expressed concern for Juventus star Cristiano Ronaldo online after he posted a selfie on social media as he continues to self-isolate following his positive Covid-19 tests.

Ronaldo, who has been asymptomatic throughout his time in quarantine, posted the selfie on Friday alongside the caption “kaizen philosophy,” referring to the Japanese business philosophy meaning “continuous improvement.”

The 35-year-old – who recently shaved his head – is sporting stubble in the photo rather than his trademark clean-shaven look, and a number of his followers felt he did not look well.

“Is it me, or does Cris look so different here?” asked one fan, to which others agreed, variously asserting he “looks ill,”“very exhausted” and “a bit thinner.”

Another puzzled Twitter user added: “There is a weird way CR7 is looking these days,” while one even asked: “Why does my boy look like he going through chemotherapy?”

Is it me, or does Cris look so different here?

“This isn’t it man,” another follower added conspiratorially. “Petition for the CR7 household to produce the real Ronaldo. His PR team really think they’re fooling us with this btec lookalike.”

This isn’t it man. Petition for the CR7 household to produce the real Ronaldo. His PR team really think they’re fooling us with this btec look alike

It wasn’t just the footballer’s appearance that attracted concern, however, as one fan questioned the state of his mental health – before respectfully adding that he was still the GOAT.

Ronaldo has been in isolation since he tested positive for Covid-19 on October 13. He has returned positive tests twice more since then on October 22 and October 27, causing him to miss Juve’s last four matches.

Most recently, he was forced to sit out of Wednesday’s UEFA Champions League clash with Barcelona, and made his displeasure known when he wrote in a since-deleted comment on Instagram: “PCR IS BULLSH*T,” referring to the polymerase chain reaction method of testing for coronavirus.

Ahead of the game, he posted a bizarre video of him wishing good luck to his teammates after jumping off a treadmill to perform his trademark “Siuuuu” celebration.

“If you knew absolutely nothing about football you would think this is a Turkish waiter trying to get you into his bar/restaurant for the Juve game, when you’ve got an all inclusive band on,” quipped one fan in response to the video.

If you knew absolutely nothing about football you would think this is a Turkish waiter trying to get you into his bar/restaurant for the Juve game, when you’ve got an all inclusive band on 🥳

Juve haven’t fared well without the five-time Ballon d’Or winner. They were beaten 2-0 by Barcelona in that match, and have been held to 1-1 draws by both Crotone and Hellas Verona in Serie A.

The Bianconeri travel to Spezia on Sunday before taking on Ferencvaros in the Champions League on Wednesday.

Ronaldo’s return to playing action will depend on him testing negative for the virus. Earlier in the year his teammate Paulo Dybala had to isolate for 46 days until he did so, after returning a positive test.

However, it has been reported that he could return to training on Tuesday because he has a “low viral load” and as such there won’t be a risk of him infecting others. In Italy, it’s said asymptomatic people with a low viral load are allowed to end self-isolation after 21 days.

Trouble ahead? Stores boarded up across US over fears of widespread looting and riots around election (PHOTOS) — DHT USA News