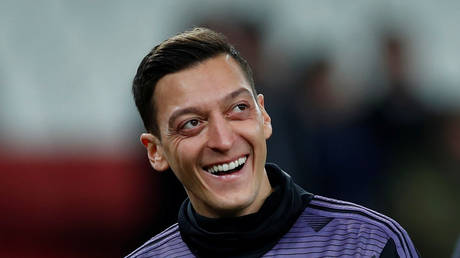 Fans have heaped more praise on Arsenal outcast Mesut Ozil after he spoke about his efforts to provide 1,400 meals to children across north London each day during the October half-term.

Ozil, who began the scheme of providing meals to impoverished families, homeless shelters and refugee charities back in March, has ramped up the output after the UK government last week voted against a Labour bill to extend free school meals throughout the holidays.

He told Sky Sports: “This week, during the half-term, lots of kids are facing a tough situation with regards to food. No child should go hungry. That’s the most important thing and wherever I can help I will.

“Healthy meals for children should be a given, and not a privilege.”

Aided by Sunday League players from Enfield United, Ozil’s team packaged meals through the night to be distributed to schools each morning.

Tony Lewis, chief executive of Unitas Youth Zone in Barnet, said: “Burnt Oak and nearby Colindale have the two highest rates of child poverty in Barnet.

“Since lockdown, Unitas has supported over 100 families with [Ozil’s] team donating 50 meals a week to Unitas, as well as 50 each to two other local charities.

“On top of that, Mesut’s team has donated 200 meals a day to the Youth Zone for its October half-term holiday club provision.”

The meals provided – made by German chef Stefan Pappert, who once cooked for the Queen – were made using fresh produce and organic pasta, described by the footballer as “healthy, nutritious and also filling.”

Fans reserved plenty of praise for the 32-year-old, with a flood of Twitter users telling him “well done” and “fair play” in response to the news.

“Class from Mesut again,” one fan gushed, while another described him as “a man with a big heart.”

Another Twitter user replied with a shaking hands emoji and “Ozil and Rashford king behavior.”

From feeding average footballers at Arsenal to feeding kids. Total respect to Mesut. 🙏🙏🙏

Manchester United striker Marcus Rashford has also led a high-profile campaign in recent months for the government to extend free school meals. He began a petition on the matter, which has almost 1.1 million signatures.

Ozil recently impressed fans with another charitable gesture when he offered to pay the salary of Jerry Quy, who played Arsenal mascot Gunnersaurus for 27 years, when he was let go by the club.

The No. 10 last played for Arsenal on March 7, and he has not made a single matchday squad for the Gunners this season. Earlier in October the club left him out of their Premier League and UEFA Europa League squads for this campaign, making him ineligible to play for them in either competition in the coming months.