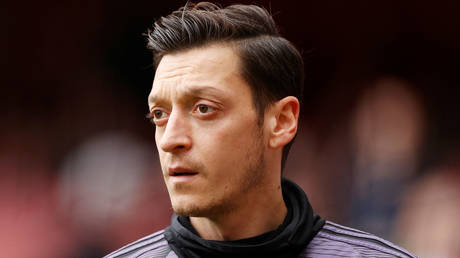 Much-maligned Arsenal top earner Mezut Ozil has divided fans after reportedly extending his secret charity efforts to provide thousands of meals for schools in London, contributing some of his $450,000-a-week salary to the cause.

Playmaker Ozil has been funding meals for charities and shelters since March and is now expanding his generosity to provide 1,400 meals each day at 11 schools in Arsenal’s north London locality, according to Telegraph journalist Sam Dean.

The philanthropic move is at odds with the image of the midfielder as a mercenary, fueled by his stated refusal to leave the Gunners in August despite desperate attempts by the club to reach agreement on paying up his contract, which runs until next summer.

Ozil stoked controversy when he recently admitted that Arsenal players had refused to take paycuts because “many questions were unanswered” by the club, leaving the squad uncertain that their wages would be used to prevent more redundancies at the Emirates Stadium.

The power of football: Mesut Ozil is providing 1400 meals per day at 11 schools in the north London area. The #AFC midfielder has been paying for meals for charities & shelters since March and this week expanded it to schools.

His brand pays, all part of the plan

I have a monthly direct debit to Save The Children and a charity who provide water to poor communities in Africa. Do I get a shout out too?

“People have been trying to destroy me for two years,” he told The Athletic, adding that an agenda was being pursued to “turn the supporters against me and paint a picture that is untrue.”

Ozil was lauded as a hero by some after news broke of his donations, following in the wake of Manchester United forward Marcus Rashford’s relentless campaign to influence UK government policy on free school meals.

“Anyone still think this man refused a paycut because he didn’t want to help?” asked one fan, calling the club owners “greedy”.

“No – it’s the opposite. He knew you can’t trust [the owners]. You can now see he was shafted.”

Since March and I’ve haven’t heard about it till now. But I was told he just does charity work for PR

You do realise it’s never been a secret that Ozil is a very charitable person. Always has been. Nothing to do with Arsenal or this exact moment. He does this 🤷🏾‍♂️

This will somehow be turned on Mesut as a *PR* stunt 🙄

Others were less enthused. “His timing of doing this can’t be any better, can it?” asked one cynic, while another suggested that Ozil was seeking to seize upon some of the adulation that Rashford has enjoyed, saying: “Interesting how this comes out in the public right now, in this particular moment.”

Another pointed out: “He’s done this since March and I’ve haven’t heard about it till now. But I was told he just does charity work for PR.”

Ozil has rarely featured since new boss Mikel Arteta took over at the end of last year, playing no part in the club’s FA Cup final triumph that gave the coach his first trophy.

He claimed last season that he “loved” the club and said that his decision not to take a paycut had “possibly affected my chances on the pitch”.

He’s killing them with PR. I may stop supporting Arsenal after 24 years due to the treatment they’ve doled out toward Mesut Ozil. Shambles.

I like him as a human being but as a footballer he is lazy and ducks out of games.

“You do realize it’s never been a secret that Ozil is a very charitable person?” said an Arsenal supporter on Twitter.

“Always has been. Nothing to do with Arsenal or this exact moment. He does this.”

Others praised the gesture as “amazing”, warned that Ozil would be accused of a PR stunt and asked why the former Germany international had attracted so much derision.

Ozil scored only one goal in 23 appearances last season, failing to appear in any of the final ten matches of Arsenal’s Premier League season.