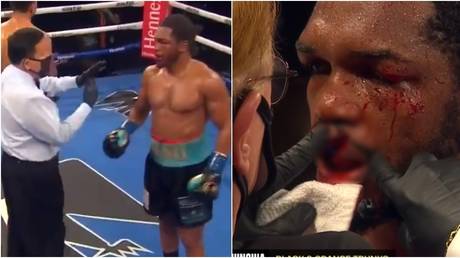 It wouldn’t be Halloween without a little blood and guts, and that was certainly provided in Friday’s fight between boxers Jaime Munguia and Tureano Johnson as the latter suffered a grotesque injury to his lip.

Combat sports has given us an array of eye-watering clips over the years, with the split lip suffered by UFC star Alistair Overeem in his defeat to Jairzinho Rozestruik late last year a particularly fine example, and the latest offering from Friday’s fight between Munguia and Johnson just as cringe-inducing.

Undefeated Mexican middleweight Munguia (36-0) was up on the scorecards in the sixth round of his fight with the 21-3-1 Johnson but he certainly didn’t have to rely upon the favor of the ringside officials after he connected with an uppercut which immediately sent blood spurting from Johnson’s mouth.

Now, boxers are no strangers to a little claret in the ring but it soon became clear that this was no ordinary cut when the cameras focused on the injury to reveal the upper left of Johnson’s lip had been savagely split open.

Somewhat unsurprisingly, Johnson was declared unfit to continue by ringside medics and the knockout victory was awarded to Munguia as a result.

Johnson’s corner had initially questioned the method of victory, alleging that the injury was the result of an errant headbutt but replays soon showed that a perfectly timed short uppercut was the shot which caused the Bahamian’s lip to explode.

The win – and in particular the vicious nature of it – sees the 24-year-old Munguia deliver another warning to the rest of the middleweight fold and improves his record to 34 straight wins without defeat.

“I want any of the 160-pound champs,” Munguia said afterwards. “Any (of them) would be great for me.”

And judging by the reaction online, many fight fans are endorsing this idea – but they could maybe do without his fights being quite so x-rated.