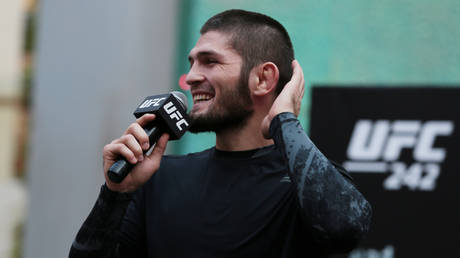 Khabib Nurmagomedov being recognized by the BBC as the winner of its annual World Sports Star award is a watershed moment for the mainstream recognition of mixed martial arts, legions of the Russian’s fighter’s fans have said.

Nurmagomedov became the first prizefighter to win the prestigious honor since Evander Holyfield in 1996 when he was confirmed as the recipient of the yearly prize late Thursday, beating internationally recognized sports stars LeBron James, Dustin Johnson and Katie Taylor in the process.

The award comes two months after the Russian’s final fight in the UFC cage in Abu Dhabi in October, where ‘The Eagle’ increased his stellar professional ledger to an incredible 29-0 with a second-round submission victory against Justin Gaethje.

An emotional Nurmagomedov swiftly announced his retirement after the fight, detailing how he would not continue with his career outside the influence of his late father Abdulmanap who passed away this past summer following a Covid-19 diagnosis.

And according to fans on Twitter, Khabib’s award win isn’t just deserved by virtue of his outstanding performances in the Octagon, but by also an example of how the sport of mixed martial arts has emerged from the shadows to become a global phenomenon – with Russia’s undefeated champion leading the charge.

A great choice. He is the best at what he does by a long way.

While I’m not a fan of the BBC Sports Personality Awards, this is huge for #MMA. Feels a bit like click bait as Khabib has not been the standout mixed martial artist of 2020. But Certainly not complaining. Congrats @TeamKhabib & @ufc 👊🏽 https://t.co/fsbfbNfuMj

The BBC gong represents the latest achievement in Nurmagomedov’s unmatched career, but is it the final chapter in his historic career? UFC boss Dana White has maintained that he is quietly confident in convincing Khabib to return to the UFC fold for one more fight to attempt to reach a 30-0 record – a stated aim of both Khabib and his father.

He has so far rebuffed White’s proposals but the idea of an iconic fight with fellow UFC legend Georges St-Pierre is thought to be an attractive possibility for all parties.

Imagine an MMA fighter getting this type of mainstream recognition of his athleticism & popularity 10 years ago. Amazing how far we’ve come.

But the possibility of what would be a highly-lucrative fight for all involved appears to be contingent on Khabib walking back a promise he made to his mother that he would end his career following his title bout with Gaethje two months ago.

Whatever the Russian star’s next move ends up being, it is clear that his legacy has been set in stone – perhaps even more so now with the addition of the annual BBC award to his already overfilled trophy cabinet.