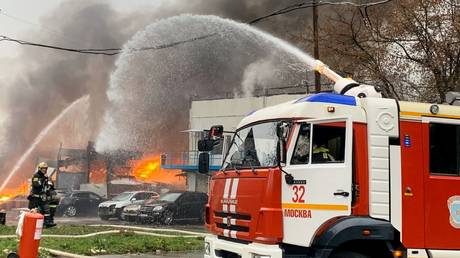 Firefighters have rushed to contain a large blaze raging at a Moscow warehouse packed with gas tanks. The fire caused several explosions on site.

A video from the scene shows bright flames and a thick cloud of grey smoke rising towards the skyline not far from high residential buildings.

Another video shows an explosion amid the blaze.

Sources told newspaper Izvestia that the blaze broke out at a filling station and that there were around 20 gas tanks inside the warehouse.

The city’s emergency services confirmed that there may be gas tanks in the building. They noted, however, that what exactly is burning at the site has yet to be determined.

Witnesses told local media that they heard bangs coming from the buildings. It is understood that no local residents are in danger.

Fire crews have arrived at the scene. A reporter for Life News present on-site said that the fire “has nearly been put out,” and that firefighters were “pouring a lot of water on the tanks.”

He also reported that a two-story building had been burnt down “almost completely” and that two vehicles were damaged by the fire. He also recalled seeing numerous gas tanks lying on the ground.

There were no reports of casualties.