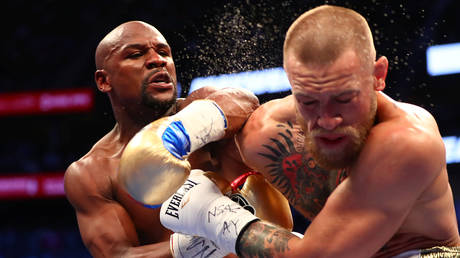 Boxing icon Floyd Mayweather Jr. has confirmed he will not step into the ring again professionally, but he will continue to take part in exhibitions and is willing to face more MMA fighters.

“As of right now, I’m doing exhibitions. I’m 100 percent sure that I’m not fighting against any boxer anymore. So, that’s out of the question,” he told CNN.

“I mean, just my faculties mean a lot to me. Money don’t make me, I make money and my health is more important than money.

“As far as me doing exhibitions and me fighting MMA guys, will I do that in a box ring? Absolutely.”

The 43-year-old came out of retirement to fight UFC star Conor McGregor in a sensational crossover in 2017.

The bout was fought as a professional boxing match, extending Mayweather’s perfect record to an unbeaten 50-0 when he won via a 10th-round TKO.

Their clash was estimated by Forbes to have brought in over $550 million in revenue, with ‘Money’ reportedly taking home half that figure.

“Anything I [do] now, my money is guaranteed because my name is engraved in stone,” the American added. “I’ve proven myself for over twenty years of what I can do, and the numbers I can do on pay per view as well as streaming, so I’ve showed what I can do.”

He took just two minutes and 12 seconds to beat the 22-year-old in the first round, and he reportedly earned $9 million for the fight – more than $68,000 for each second he was in the ring.

Best work light for mechanics in 2020