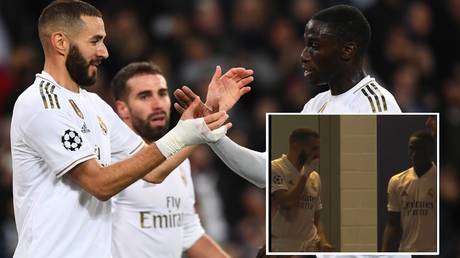 Real Madrid forward Karim Benzema has been accused of bad-mouthing teammate Vinicius Jr in the tunnel at half-time during the Spanish team’s last-gasp Champions League draw at Borussia Monchengladbach on Tuesday.

Real rallied from 2-0 down in Germany to scrape a draw thanks to late goals from veteran hitman Benzema and Brazilian midfielder Casemiro.

That saved Zinedine Zidane’s men from suffering another embarrassing Champions League night, after they fell to a shock 3-2 defeat to Ukrainians Shakhtar Donetsk in Spain last week.

Similar disaster was averted on Tuesday in Germany, but cameras appeared to pick up a hint of the frustrations within the Los Blancos camp when Benzema was heard conferring with French teammate Ferland Mendy at half-time.

According to French TV outlet Telefoot, Benzema ripped into Brazilian winger Vinicius and even told Mendy not to pass to him.

“He does what he wants,” Benzema is alleged to have said in  French, without mentioning Vinicius – who was standing nearby – by name during the conversation.

“Don’t play with him, brother. He plays against us.”

Karim Benzema tells Ferland Mendy not to pass to Vinicius Jr at half-time during last night’s game between Gladbach & Real Madrid: “Brother don’t play to him. On my mother’s life. He is playing against us.” pic.twitter.com/zmpciQRgAV

Benzema and Mendy were seen speaking with Vinicius as the team made their way back onto the pitch for the second half.

At that stage Real were 1-0 down thanks to Marcus Thuram’s 35th-minute opener, and the 23-year-old forward – who is the son of French World Cup winner Lilian Thuram – doubled the hosts’ lead with another strike on 58 minutes.

Real rallied late on as Benzema scored in the 87th minute before Casemiro snatched a point in the third minute of injury time.

Vinicius Jr, 20, was subbed off with 20 minutes to play, being replaced by Belgian wingman Eden Hazard.

Mendy, it should be noted, did pass the ball three times to his Brazilian teammate after the break, despite the alleged advice from Benzema.

The Xbox Series X is now an actual refrigerator