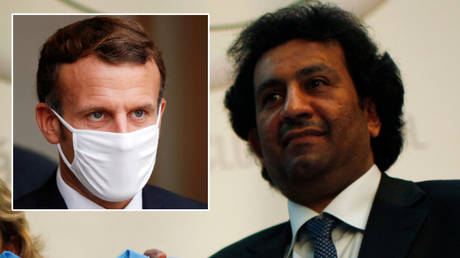 Controversial Malaga owner Sheikh Abdullah Al Thani has warned French President Emmanuel Macron to apologize for his incendiary comments about Islamic terrorism, warning the head of state that he will “bear the consequences”.

The incensed Sheikh, who has been at the center of a court case concerning the Spanish club, ordered Macron to say sorry for his remarks about the “monstrosity” of “Islamic terrorism” following the murder of teacher Samuel Paty in Paris last week.

Responding to a tweet by Macron that dismissed “hate speech” and called for “universal values” in “the spirit of peace”, Al Thani insisted that Islam was “against violence, racism, extremism and incitement”.

“You must stop your systematic campaigns against Islam and the master of creation,” he told Macron in one of a series of angry public messages.

“Get to know the correct Islamic religion and not what you and others want. Do not link Islam with terrorism and Muslims.

“If there is no official apology to all Muslim countries regarding the speech of racism, incitement and hatred…so bear the consequences.”

Macron had initially spoken out following the shocking killing of Paty, who had shown children an offensive image of the prophet Muhammad.

Paty was awarded the French Legion d’honneur, the highest honor awarded by the French state, in recognition of his attempt to explain the importance of freedom of speech.

The tragedy has already led to a public scandal involving one of the world’s most high-profile footballers after Manchester United midfielder pledged to sue English tabloid The Sun over a story that he had quit the French national side because of Macron’s announcement.

Al Thani went on to share two videos of preachers before adding a clip of Macron alongside another message about his religious faith.

The Sheikh’s family, which has links to Champions League finalists Paris Saint-Germain through the Emir of Qatar, was said to owe fallen Malaga around $10 million in a court case last month amid allegations that they illegally withdrew money from the club for their personal use.

Seven years after reaching the Champions League quarter-finals and ten years after Al Thani took over, Malaga are in the second tier of Spanish football and he faces having his shares seized should he not pay a $6.2 million bond that is said to have been placed upon him.

Money lent by the club to the family was allegedly used to pay for personal expenses including flights, holidays, hotels, chauffeur-driven cars, lawyers and accommodation, according to Football Espana.

Los Albicelestes lost around $50 million in broadcasting income when they were relegated from La Liga in 2018.

Before you buy a tech gift this holiday season, here's some sage advice